Hi there,
Im currently trying to understand how to create a FSR sensor.

After many countless HRS of research this is what i have come up with sofar. I know that i need a layer where the traces are and then i have the feeling i need another 2 layers for the conductor and adeasive.

Here you can see what a FSR sesnor looks like: 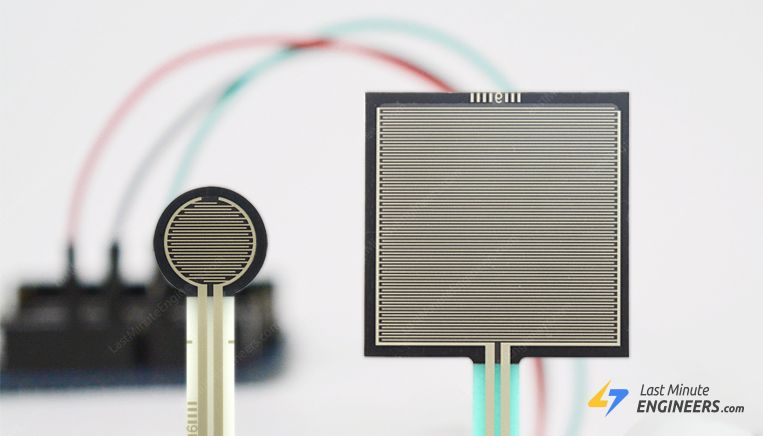 When designing such sensor do i have to add the conductor layer into KiCad and the adveasive? or is that something outside of this program and if so what would you suggest me to do for this step?

To be honest, it would be a lot cheaper, easier, more reliable and correctly scaled if you bought a ready made product.
They appear to be under $5US and just a PCB base for applying the carbon will probably cost that much to have made.
After making a base you will need to find someone who can supply/apply carbon with the correct resistance required (which is probably a commercial secret). Then you will need a spacer and a metal screen and a cover which are all outside Kicad, after which you need to screw it all together somehow.

hi,
thats true, they are very cheap to buy if they are in the right shape you need them to be. Sadly for the application im working on none i have found online would fit the criteria and such is why i am looking at making my own.

the spacer which has adheasive would that be something a pcb manufacture could make? As i have found the carbon which they use for the FSR’s sensors and they have offord me to purchase that.

Would it make sense to add a protective layer/film ontop of it? Would i maybe get that from a pcb manufacturer or do you have an idea where i might be able to get that from?

When you know how a PCB is made, you will understand what KiCad has to offer: Layout for multiple conductor layers, through holes and vias, solder mask, silk screen and some more.

So even without knowing in detail how a FSR sensor is made, I can imagine that the layout can be generated by KiCad.

But that’s exactly the point: layout is something in the middle of the procedure to generate such a sensor.

Only then you should start thinking of a layout. You will need to cooperate with the manufacturer: What are the rules to design such a thing? What are the layers needed? How can I map these layers onto layers offered by KiCad? What will be the interface to the manufacturer (Gerber or something else?).

So to summarize my (surely limited) view: KiCad may be part of your design flow, but a lot of other work has to be done before and after.

Hi @holger,
thank you very much for this great answer

These sensors are not “just carbon”.
I read a part of:

A force-sensing resistor is a material whose resistance changes when a force, pressure or mechanical stress is applied. They are also known as force-sensitive resistor and are sometimes referred to by the initialism FSR. The technology of force-sensing resistors was invented and patented in 1977 by Franklin Eventoff. In 1985 Eventoff founded Interlink Electronics, a company based on his force-sensing-resistor (FSR). In 1987, Eventoff was the recipient of the prestigious international IR 100...


and according to Wikipedia it’s some pressure sensitive polymer.

What are the goals you want to reach?
Do you want to experiment and hack a bit to make a few of such sensors, or are you looking to integrate big numbers of customs sized sensors in a commercial product?

The article you mentioned, shows silver printed over the conductive polymer: 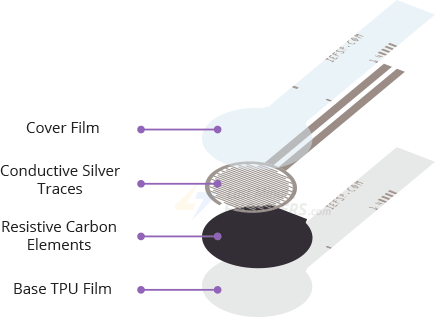 But it does not show any sort of “spacer”.

If you want to experiment yourself, you could design a PCB (even regular FR4) with copper pattern and then experiment with “painting” the conductive stuff over it. Or maybe you can use conductive paint instead of the PCB.

But if you robustness and long term reliability you need a lot of control over process parameters.

At the bottom of the Wikipedia page there are a bunch of references. One of them points to Sensitronics, and they have a design service for these things
https://www.sensitronics.com/services.htm

They can probably make sensors from a design made on the back on an envelope, then photographed and mailed to them.

If you want to experiment yourself, you could design a PCB (even regular FR4) with copper pattern and then experiment with “painting” the conductive stuff over it. Or maybe you can use conductive paint instead of the PCB.

I think it is a bit more complicated than this.
Resistance apparently changes with pressure.
Something tells me that you would just end up with a switch, like most “household remote control” transmitters using that method, Paul.

I think it is a bit more complicated than this.

Why do you think so?

Bit later…
No it’s even simpler. 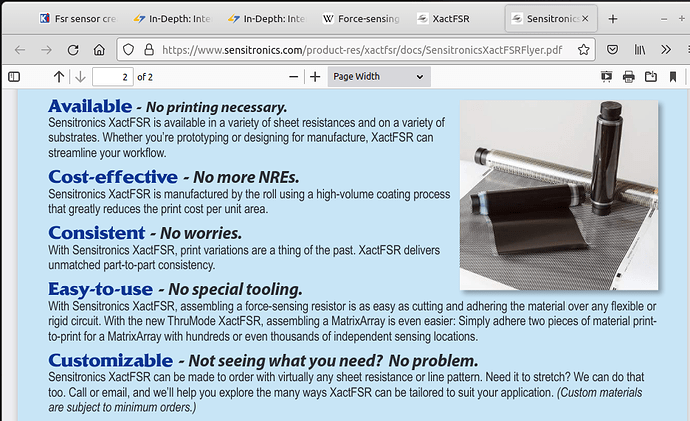 I have no affiliation with that company at all. I just found it by the link at the bottom of the page on Wikipedia.
The stuff was apparently patented in 1977, and those patents have long since expired, I have not looked how many other companies make similar stuff.

Thanks Paul,
I stand corrected.
That “magic mat” changes resistance with pressure. Somehow I misread stuff.