Any plans by the great KiCad team to include something like this soon? If so, yeah! – and if not, why not?

This video was not speeded up. It was live. Edit: Now the video is gone.

I’m not very impressed by that video.
It does automatic layer changes for horizontal and vertical track segments, which is an old trick from the '80-ies, and that can be useful, and KiCad does not do that (yet). The routing is also not very “intelligent”. It just pushes horizontal track segments to the other side. Why would you want to place these 10 via’s here: 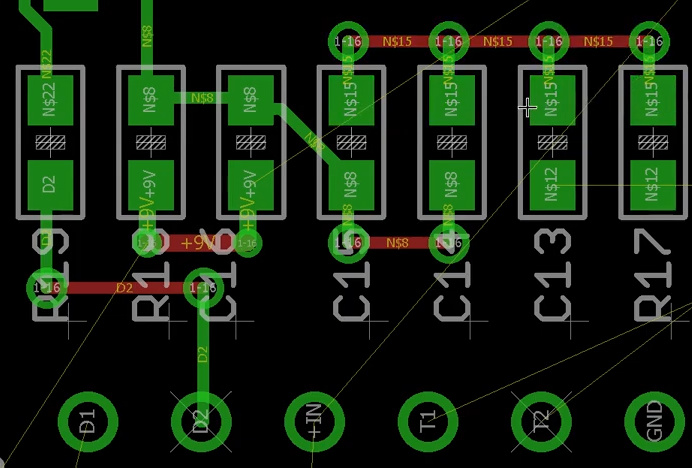 Also, a bit later (@02:54) he almost got into trouble already because the track from C17 has to be routed around all the via’s to the “GAIN” thing in the upper left corner.

On a 4 layer PCB it does not matter much, but on a 2 layer PCB you want to keep your GND plane intact on one layer, and this needless layer switching destroys your GND plane (on a 2 layer PCB). Instead of the automatic layer change, the v shortcut key in KiCad works pretty similar. During routing I usually have one hand on the mouse and the other on the keyboard. This does need some extra mouse clicks and keyboard key presses, but I would not want to exchange the control I have now in KiCad with a blind pushing of horizontal segments to the other side.

What you did not see on that demo is the footprint placement, and figuring out that is often more work then laying the tracks, especially on a PCB like this. The actual tracks laid are pretty trivial. Especially on a 4 layer low density PCB as in that example. Routing PCB’s becomes more difficult quickly when you start running out of space. I did not see any push 'n shove capability in that demo, and that is much more important than the automatic layer change. The automatic layer change can shave a few minutes of a PCB design, while KiCad’s push 'n shove can help you complete routing of PCB’s that would be nearly impossible otherwise.

But overall the demo is much too simple to give a meaningful insight in how useful this feature is. That demo PCB is trivially simple to route in (almost) any decent PCB program. Often it is the last 10% of the tracks that get you into trouble

How much experience do you have with KiCad’s interactive router? Have a look at a few video’s from: https://www.youtube.com/results?search_query=kicad+push+and+shove

Thanks. Good opinions from you there. I show this video just as an idea for eventual development, as an eventual “add on”. Maybe this kind of function could be developed into KiCad somehow to get “good” as the repetitive, manual via making still doesn’t dance well in my fingers

“How much experience do you have with KiCad’s interactive router?”

Not much, yet, I’m about to do my best to learn… 2 hours later, have now tested it a bit, it seems good, maybe so good that this post is unnecessary… Edit: Now the bad video is gone.

Well, the “bad” video is back (to be able to compare) and also a new one, which shows how KiCad “Shove” router acts and performs, in this case. It’s a bit amazing how snappy and responsive KiCad seem to be! Version 6 – when will it come?

The Kicad “Shove” router is for sure powerful and fast, but it could also get more powerful, let’s say more usable, if we get some more options in the settings, why not a “Shove Plus!” =with Emergency Automatic Via Generator which might be influenced by the old Eagle “Follow Me” router, hopefully this time in an updated/optimised Godzilla version…