Error in routing: "Cannot start a routing inside a keepout area or board outline"

Hi,
I am working on a copper spiral project. I have just managed to draw a copper spiral footprint onto kicad. Right now, I am trying to routing the copper traces with my spiral with vias. While doing this there is an error occurring that “Cannot start a routing inside a keepout area or board outline”. So, I don’t know whats I am missing or doing wrong. And I am kind of new to kicad. I think I am missing a very basic thing here. It will be very nice if someone comes up with a suggestion. The respective files are attached. Thanks. 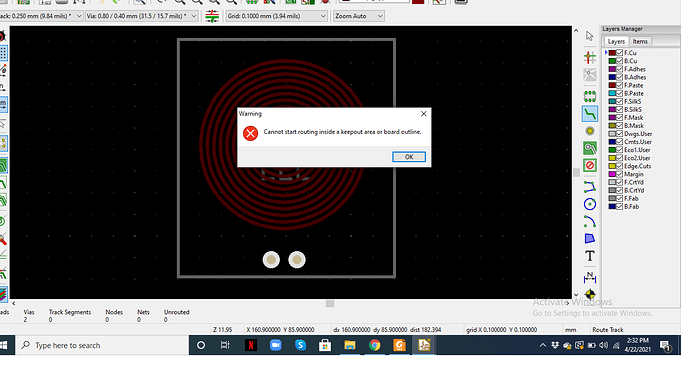 Which kicad version are you using? This sounds like a bug that was fixed a few minor versions ago.

Thank you for your response. My kicad version is 5.1.9, still getting this error, don’t know whats I am missing there.

You’re clearly a beginner, making beginners mistakes, but that’s all right.
First, never try to just make a PCB. Always work with complete projects, and make a schematic in your project. Even for a project as trivial as this. A schematic creates a netlist, and a netlist is needed to connect things on the PCB together.
For this project, your schematic may look like something like: 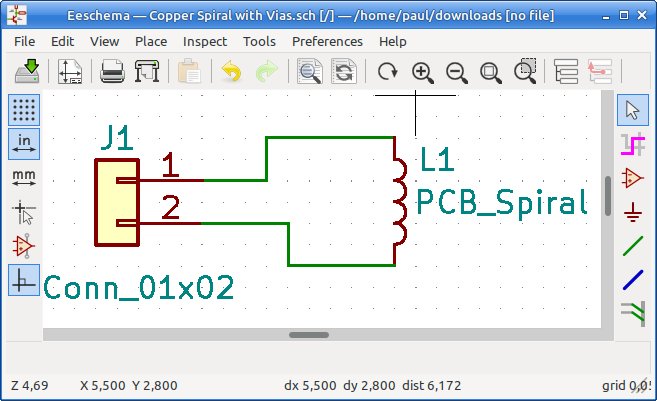 After that, a bit of an update of your inductor footprint. There are scripts to generate such spiral inductors, (search this forum or directly on github), but for now I’ll just re-use what you have made.
Footprints need pads. If a footprint does not have pads, you can’t connect anything to it. Pads can be either SMT or THT, but do not try to abuse vias for pads.

Then: Footprint Editor / File / Export Footprint and browse to you newly created library, and and save the footprint there.

To check myself, I exited the footprint editor, loaded it again from the KiCad Project Manager and loaded your footprint. For some unknown reason it put the footprint name on F.Cu, and that can’t be right so I changed that to F.SilkS.

You made your spiral out of 90 degree arc’s. Not a mathematically correct “spiral” but close enough. I usually use 180 degree arc’s to approximate a spiral

Your copper tracks are also quite narrow, they’re 6 mil. If you want to make more of such footprints, different number of turns, width, etc. then I really recommend to look into those scripts some time…
I also modified your footprint a bit by adding pads to the ends, and then saved it in My_Lib.

Then I went back to the schematic, and added a link to the footprint to the inductor symbol. Hover the mouse cursor over the inductor, press f for footprint, then Select (Right from the text field) Browse to My_Lib and select the LLL footprint, and it’s name appears now in the “Text” field.

I did the same for the connector, and just chose some random one. Then Eeschema / Tools / Update PCB from Schematic [F8] to update the PCB.
Now you have two of those spirals. The old one that was already on the PCB, and the new one fresh from the library. Note that the new one has pads, and there are some thin white lines to the connector. These are called “ratsnest” lines, and KiCad wants you to make those connections. 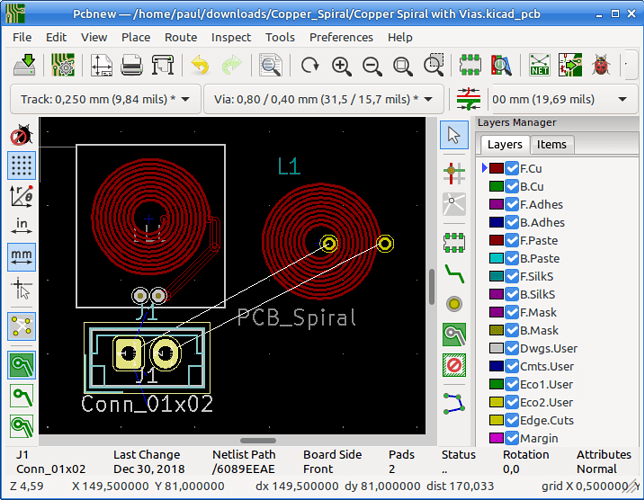 The next mistake is likely to be those 4 white lines. I assume these are supposed to be the outline of the PCB. A lot of layers in KiCad have very specific meanings. Outlines of the Pcb must be on the layer Edge.Cuts, and Edge.Cuts must only contain lines that are edges of the PCB. This is needed because all graphics on Edge.Cuts ends up in the Gerber file for the PCB outline to manufacture a PCB.

So I cleaned it up a bit by just removing your white lines, and drawing some new lines on the Edge.Cuts layer. (Select the layer in the layer manager before you draw lines. Or you can select your existing lines, edit them and move them to Edge.Cuts).

Last I drew a few tracks to connect the connector to the pads of the inductor and then: Pcbnew / Inspect / Design Rules Checker… / [Run DRC] and it says the PCB is OK without errors or unconnected items.

Note:
I do not know how you want to have it, so I just mucked around a bit. As a learning experience it’s probably a good Idea if you re-create your own version from these steps. But anyway. I attached the project.

I encountered no problems with these steps.
I am not sure what your original problem was. I did not see a keepout area on your PCB. But one of the problems is that the DRC prevents you from making connections to random copper such as the spiral from your footprint.

I was mistaken, sorry for the confusion.

@paulvdh’s excellent advice is worth following and understanding.

Don’t know how to thank you. I really appreciate for your detailed advice and solution. By going through your message, I have learned a lot about kicad and its functioning, which really helps in my project. Thanks a lot.