Planning out a new Tunable-Noise-Generator project that requires Tracks of Fractal and possibly Spiral shapes got me spending some time determining the Smallest, most Efficient Tool-Chain (I did not want to be jumping from one program to another that could do only some aspects - I wanted to do it all in One program, if possible)…

One Tool lead to the next Tool, and couple of hours later (after repeating the process with a dozen Drawing Tools and tweaking/mixing settings), I was able to dial it down to Simplicity (I figured this was going to happen…).

Yes, tweaking and messing with various settings produced some success with most of them but, the Only one that did it All without any fuss was FreeCad (but, only after setting Legacy export of DXF!!).

The biggest challenge for all the programs was mixing Straight and Curved lines and avoiding limitations of Kicad’s Graphic import.

Screenshot shows quick test of the Hilbert Fractal and a Spiral… 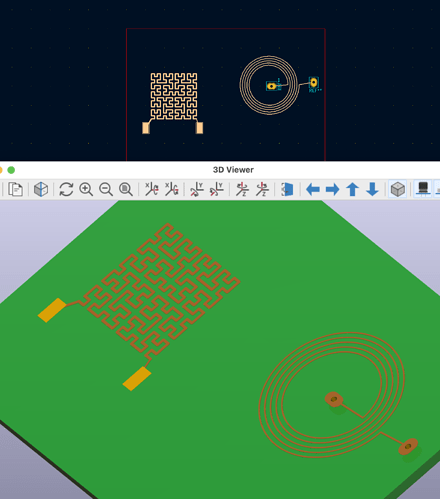 That is very cool! But where’s the Mandelbrot?

It’s still on my 1960’s Tee-Shirt but, I can’t tell the difference between Madelbrot, Paisley and the holes in the shirt – mostly only scant, bare threads are left