I have one QFN footprint with power pad consisting of:

Opening first footprint I selected one of through hole pads, right clicked and selected “Copy Pad Properties to Default”. 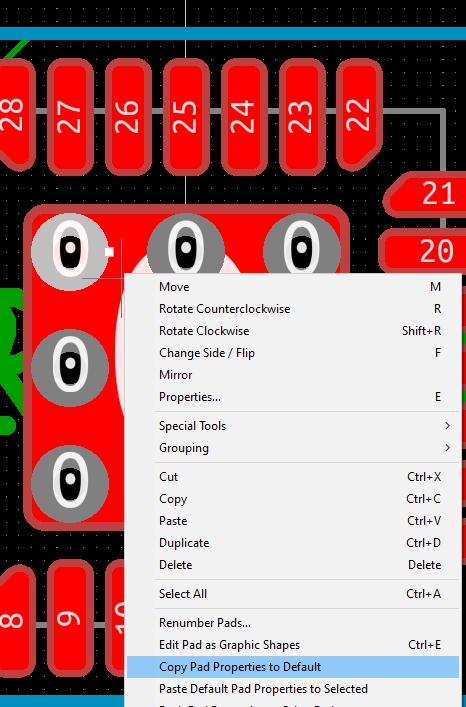 Then I opened new footprint, clicked from right side tools: “Add a pad” and I got Pad 25 being added:

Pad25417×544 9.27 KB
A moment ago I was adding at bottom power pad the same as at top and I needed not to edit its dimensions so it was default those time. From that I see that “Copy Pad Properties to Default” have some effect. Through hole pads dimension is 0.6. Pad 25 dimension is 0.9x0.6 so they have something in common

Is it a bug or it is how V6 is expected to work but I just don’t understand something (it is my first day using V6).

"Copy Pad Properties to Default” is a little bit weird/cumbersome. It takes into account the footprint component type so with a “SMD”-component you never get a THT-Pad as default (and the other way around).
There was already a issue/discussion regarding this topic on gitlab. But I didn’t spend much attention. (because my workflow doesn’t uses the default-pad-setting, I create the first pad with correct sizes/parameters and the following pads are mostly copied/pasted).

I create the first pad with correct sizes/parameters and the following pads are mostly copied/pasted).

I typically copy KiCad footprint then edit first pad and need to copy its properties to the rest. In V5 I used Copy Pad Properties and Paste Pad Properties. In V6 I see it is little different.