Working with V6.
I am learning how to edit custom shape pads (I didn’t found any description of it so I am experimenting).
I copied SOT-89-3 KiCad footrpint into my library and wanted to modify it a little.
I rounded pad 1 and pad 3 then I wanted to modify accordingly pad 2…
When you select F.Paste you see that whole pad is pad.
When you click pad 2 (to select it) and then Ctrl+E to enter Pad Edit mode and then Ctrl+E to exit Pad Edit Mode then you see that pad 2 lost poligon attached to it (digit ‘2’ is smaller and when you select F.Paste you see no paste at poligon).

Do you know how to edit it not loosing connectivity (I wanted to round all corners a little)?
I think of making it (old way) of 2 rounded rectangles.
According to Nexperia BCX56 datasheet I also want to not have a paste at whole pad.

Some of the original kicad-library footprints are a bad starting point for the “custom Pad edit mode” feature.

The “custom Pad edit mode” has only one condition: All shapes that overlap the original pad are counted as part of the custom pad.

Unfortunately in the original kicad libraries the custom pad shapes are mostly put together with shapes which only touch another, but not overlapping. I think this is because most footprints are generated with scripts.
So the solution for your case (SOT-89-3):

I experimented a bit with this in KiCad V7.0.0-rc1 and can confirm the behavior mf_ibfeew describes.
Graphics on the copper layer that is overlapping with the pad becomes part of the pad at the moment the pad editing mode is exited.

Do this as an experiment.

The line is now part of the pad itself. 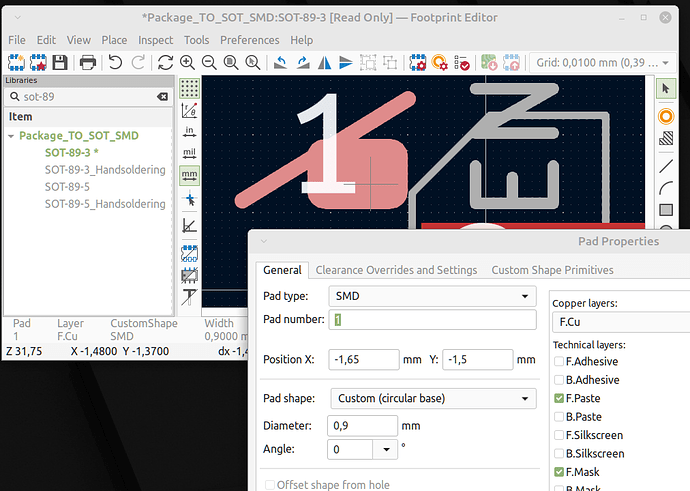 Thanks for answering my question.
I made this footprint old way - two pads numbered as 2:

both without paste layers.
And separately paste openings following datasheet I mentioned.

The line is now part of the pad itself.

This is surprising.
When we discussed (not long ago) the RFID antenna I heard first time of pad edit mode. Then I was sure that whatever I add in pad edit mode (and that is what for is pad edit mode) KiCad knows it belongs to pad.
If at exiting the pad edit mode something that is a part of pad can be deleted from pad and something not belonging to pad can be added to pad than you can’t say that pad edit mode is to let KiCad know that what you are adding in that mode belongs to that pad.
You have written that you noticed there are some problems with bottom tracks in RFID. I didn’t checked it yet but behavior we discuss now can have something to that. During pad edit mode you add a track at bottom but at exit KiCad can delete it if not correctly detect overlapping.

This is indeed an inconsistency and I was surprised by it too.
Before today, I also assumed that “pad edit mode” was a special mode and everything done in that mode would become a part of a pad.

I do like it that already existing graphic can be added to a pad (or a pad can be put on top of graphics) and then combine them into a pad.

Overall, I think it would be more logical to use a “group” of objects as being a “custom pad”. Currently there appear to be some issues with nested groups too and some details need to be worked out better.