I’ve just emerged from a rabbit hole & thought I’d share what I learned regarding available impedance calculators for coplanar waveguide (CPW) and coplanar waveguide w/GND (GCPW). As always, use this information at your own risk. 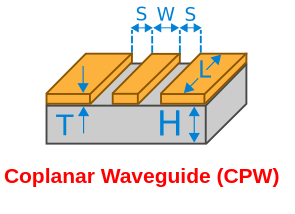 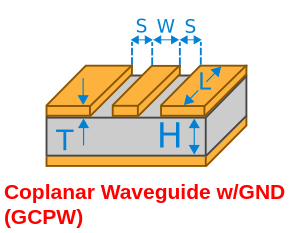 The short version is this:

If you want the long version, here goes…

I work for a small, somewhat new company. We don’t have hundreds of thousands of dollars worth of VNAs & TDRs laying around, nor do we own E&M solvers of any sort. Translation: nothing I’m about to share is backed up with my own simulations or measurements.

I was recently needing to design an antenna feed line for a particular transceiver chip we are using. This chip called for the feed to be on the top layer, copper keepouts on the inner layers, and a bottom-layer ground. By definition this resulted in a GCPW structure.

I was planning to use the Kicad calculators, but after some sanity-checking I noticed that the results weren’t making sense. First, when I increased the dielectric thickness (H), the GCPW results didn’t converge with CPW. This would be expected since the ground plane interacts less & less with the trace as it moves farther away. Second - and perhaps more concerning - was that the CPW impedance was lower than GCPW for a large portion of the plotted range. This should not be the case. You’d expect GCPW to start out lower & gradually converge to the CPW result as the gnd plane moves away. (See plot & dimensions below) 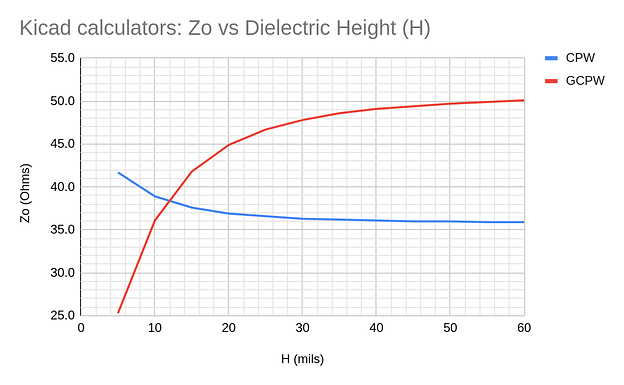 This sent me on a search to understand what was going on, and to find an impedance calculator that I could trust. I checked many (see below). Some were CPW, some were GCPW, and some were both.

Here’s a plot of CPW & GCPW results for all calculators for the geometry above. Note that I couldn’t plot Antenova’s results; their calculator operates differently & you can’t fully specify your geometry. 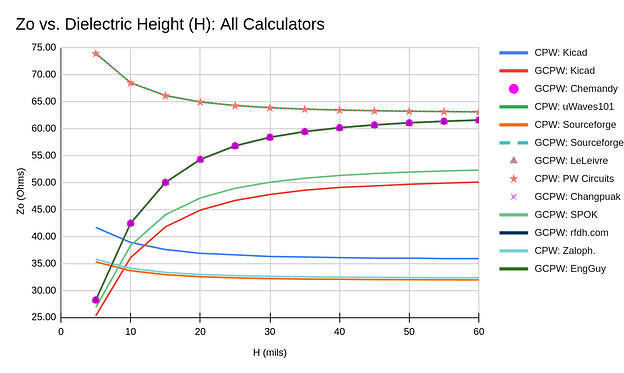 I realize there’s a lot of data there & it’s tough to pick out any given graph. But the main take-away is that results vary widely. I would have expected (hoped?) that all the CPW calculators would produce similar results - within reason, of course. And ditto for GCPW. But this was not the case.

One argument to be made is this: “Impedance calculators are based on equations, and those equations come with caveats. How do you know your geometry fit the caveats?”

Why? Because in many cases the equations/caveats weren’t given. For example, Kicad makes no mention of what its CPW & GCPW calculators are based on, so it’s impossible to know whether or not you’re using the calculator over a valid range of geometries.

In the end, I chose to trust the Chemandy GCPW calculator. This was based on several factors:

For CPW, I would use the calculator from Microwaves101 - even though they put a caveat on it regarding it being approximate, etc. My reasoning is this:

I understand that these subjects could be looked at deeper and with more rigor. Nevertheless, I hope that my journey into the rabbit hole helps someone.

Have a good one!