Btw, using v5 now for 3 days (after some hiatus) and

Sprig,
You have complained about big download size so many times, you could have learned how to compile KiCad yourself by now.
That way you can just pull tiny source changes from git and never download another KiCad binary again. Just invest into initial checkout of git repo (about 2GB).
Seriously, you should consider doing that if 1Gb download eats sizable portion of your data cap. If you use Win or linux I can help with setting that up if you encounter issues, just open another thread.

Or you can wait until someone finally finishes the work to split the installer into separate pieces but I don’t think it is a priority for devs so you might have to wait a while.

So far so good, ready to go to the fab I’d say 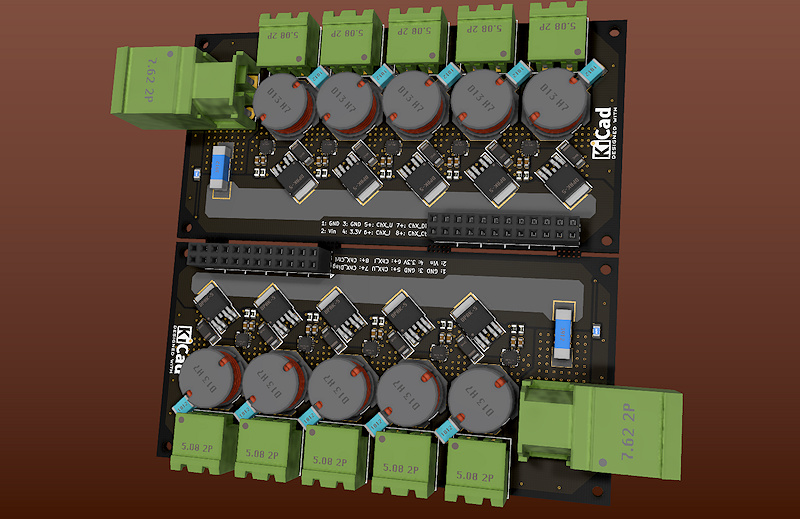 Those new free vias are the goods.

. The output cap may be hard to reword if it got burn out/decade. Nice art

Those are Infineon BTS 6133D power switches, high side, Rdson 8 mOhms, 8A/38V, they make them unchanged for 10 years now with nothing appearing that has better specs.
The small cyan colored 1812’ers are 90V GDTs.

This is a power monitoring and controlling board for a centralized supply of electric loads, well, half of it. The brains will plug into the 24 pin header and provide all the coms interfaces for remotely being able to switch the outputs and monitor power draw/faults. But right now I only need the muscle part - so this goes first.

There also are current sensors on there from Allegro (ACS70331) that ‘limit’ the monitoring to 5A per channel (the BTS also has a curent sense output, but that one is not accurate at those low currents I need to know about) and the input plug can handle 30A ‘only’ as well. So overall not a high power device, but probably 5-10 times more than what it will ever be used for in the application intended right now - its good to have head-room

The ‘hard’ part will be the brains and software anyway…

Here is my current one not as nice, but use combination of KiCad versions 5.x and 4.0. I hope make the spirit of KiCad more higher by show some pic :-). 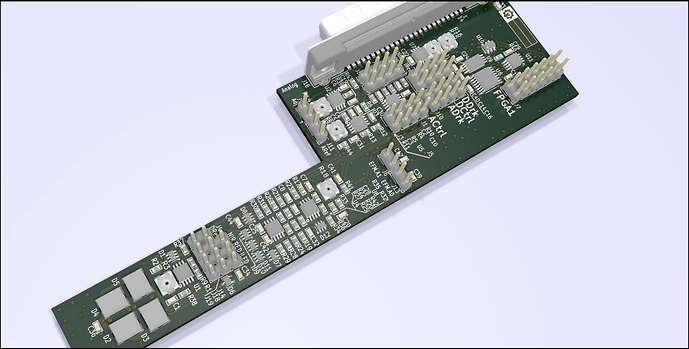 (EDITED: I upload better image for this board)

As long as we are having di… uhm I mean pic measuring contest, here is one of mine:

9 Likes
Populating my PCB
3d modeling (freecad) how to reference features between bodies of the part design workbench
Sprig December 31, 2018, 3:52am #23

Sprig,
You have complained about big download size so many times, you could have learned how to compile KiCad yourself by now.

I had already admitted to such:

I have limited data bandwidth to keep trying every new tweak to the next 1+ Gig download; and this text is just like a broken record at this point in time.

Yet, AFAIKR, I’ve only posted one OP on the issue, and the rest of the broken record comments were in reply to new users posting about the same topic. Prefer I just reply to a new user and tell them to use the search feature to see that it has already been addressed?

I like to try to make new KiCad users feel welcome to the forum if their post is considerate and polite to the existing forum members. New members are not yet exposed to the “broken record” aspect of my reply.

Sprig, with bandwidth caps, you are the last person who should consider using Nightly builds.

Respectfully, I am the one paying for my data. And while I don’t always get my KiCad version shopping right, I do still feel that I have overall been given a significant bargain with this totally awesome EDA tool.

There is also some history where development builds have been created without all the extras that make the download file so large. In fact, I would now discuss the idea that the nightlies now never contain anything other than the core program; unless that feature is something to be tested (of course).

Did you start a recent nightly?
There are loads of changes to the user interface. Including many things i would consider new features.

It seems that I could benefit from “one dialog to rule them all”.

This post was just an attempt to show a closer look from my side of the keyboard.

Everyone have a HAPPY NEW YEAR!

Everything else is really fabulous.

You DO realize that it is posts like this that make me want to spend my Data on the newest shiny toys in KiCad! So, some of my gripe about file size is because people like you post how much greatness is in the works!

Admittedly I never really left, but didn’t had a use case for KiCAD itself in the last couple months.
So just kept to my duties as mod/admin here.

@qu1ck & @nhatkhai, nice pics. Compared to what was possible in the past one really can see the progress that KiCAD makes.

I am starting a new thread to discuss which are the safe pre 5.1 Nightly versions

I’d love to run 5.0.2 release and nightlies (updated through Git instead of multiple 1GB downloads) on my Windows machine without conflicts. Documentation on the process was hard to find and conflicts seem likely based on what searches have revealed so far.

In ubuntu one simply installs both of them directly via the package manager. Works out of the box. So … time to switch to the dark side perhaps?

I liked the render, very complex CAD integration.
Just wondering, below R1 there is a track and then below a filled ( ground?) zone but it looks cut. Is that on propose or is some render issue?

Render is fine, there are separate ground zones.

@kammutierspule point out is that @qu1ck example have floating metal as ground. Which may be ok, but in sensitive application, it will be a antenna pickup think from the area and amplify it to all the traces/signal on the circuit.

it was a really concern on 3D render only, but nice electrical observation too

Yes, V5 is a massive improvement over V4; no longer a chore to be dreaded, but a creative tool to be enjoyed. Just the little things like copy and paste and more consistent behavior across modules make life so much more pleasant. Still on 5.0.0 but thinking about catching up to the latest soon.

Good looking board. I think it was on EEVBlog a kickstarter product was reviewed and the BNC contacts was so close you could not mate more than one connector at a time. If those are BNC on your board, have you considered this?

Yes, I have accounted for clearance to connect two p6100 probes, it’s tight but they fit.