BOM plugins not working/missing after installation of 5.1.9

Made a Clean install of 5.1.9 on Win 7 64bit but am having difficulty generating Bill of materials
the only difference in my installation was to install in c:/Kicad as opposed to c/Program files/Kicad (default) (work around for the custom libs and footprints write error) 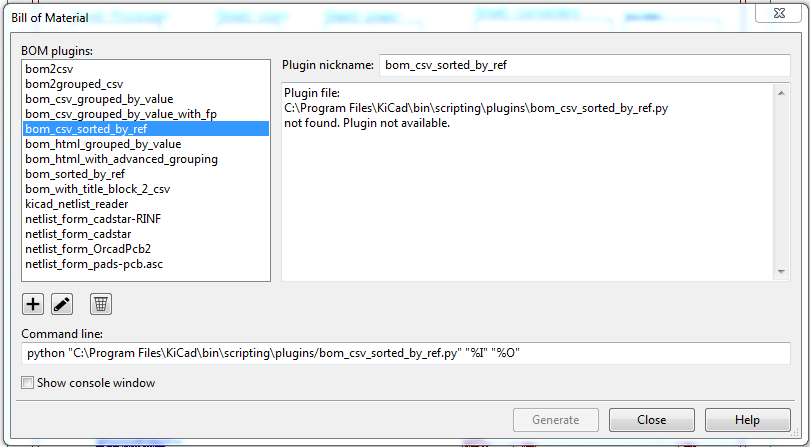 was to install in c:/Kicad as opposed to c/Program files/Kicad

When (before first KiCad installation) reading KiCad v4 documentation I have read that there are some problems as KiCad wants to save some default settings into file in the directory it was loaded to, but Windows don’t likes anyone touching files in Program files directory.
Because of this since my first installation (4.0.6) I always install KiCad (Windows 7 64 bit) into my directory C:\Programy…
I have no problem running those scripts - in Command line I see:
python “C:\Programy\KiCad\bin…”.
I have written it to let you know that KiCad is not fixed at C:\Program Files…

Giving up the natural assumption that what you said is true and assuming that you may not be truthful, I can say that I suppose you didn’t done a Clean install.
I suppose you missed kicad files in [User]\AppData\Roaming and may be somewhere there the old directory was written.
I don’t know the current documentation files, but in those (V4) I have read, there were information about those files.

by clean install i uninstalled 5.1.16 with the supplied uninstaller and installed from the new download.
don’t know if the uninstaller would clean those file you refer to but i’'l take a look and see.

Thank you for the info. i at least now have somewhere to start.

I know nothing about higher version than 5.1.9 so where from you have 5.1.16?
Uninstaller uninstalls only installed files and not files created by KiCad after installation.
If it would delete all KiCad files you would lost all your settings (like library lists for example).
I don’t know what is in those files but it is the only place I know some information from previous installation can be preserved.

(work around for the custom libs and footprints write error)

Please do not modify the “standard” kicad libraries. Make your own.
Also do not place these libraries in kicad’s install folder. The next time you update kicad they will get deleted.

Paste %APPDATA%\kicad into explorer, this will open the “slightly hidden” settings folder. Delete the contents and it will reset the paths that kicad is looking for as it still has the Program Files path saved.