Board editor bugs in V6?

I recently upgraded my home pc and work pc to V6 because there was a certain feature I wanted in schematic edditing (in retrospect it turned to be less useful for what I want). I started with Kicad 5 and I found the software to be intuitive from day 1, now it no longer feels that way unfortunately.

I am experiencing on both computers that routing tracks feels incredibly laggy. The pcb editor also fails a lot in getting a track between 2 pads even when there is more than enough space.

It also seems not to register some mouseclicks when I am routing a track. Usually when you route a track, you click on certain locations to force the track to go through that location. The pcb editor no longder does this all the time. I have to click like 3 times before the track stays on the places where I click (bit hard to explain). This often result in releasing the track because I double click too fast.

The last issue I am having (though this is one was also present on V5). Clicking the middle mouse wheel in order to pan sometimes result in unwanted zooms. This is rather inconsistent.

( I recall I had a similar issue with eagle after I hit the update button. At work my mouse wheel can also click left and right. I never use that, but in eagle it resulted in persistant zooming during panning. I was told that this was the new version had a new feature. This new feature for me was a bug so horrible I had to start using a second mouse with different mouse wheel. That was the moment I stopped clicking on ‘update’ buttons in software )

Hope that this feedback is a bit clear/usefull? Or is it needed to make a video?

Are there default settings which are different in 6 than in 5 perhaps?

When I was younger I also got quickly irritated when things changed, especially if some features that I particularly liked changed to something I did not like, or liked less.

These days I’m not bothered so much anymore, although some of the changes are really for the worse.
I really liked the simple c to copy a schematic symbol, and that has now (unfortunately) changed to [Cthrl +C] and [Ctrl + V]. (Or use [Ctrl + D]. The c key has been re-assigned to some bus foldout feature I have never used nor care about.

You also have to realize there can be no progress without change, and I’d rather live with the many improvements and make some mental adjustment here and there, than to stay stuck in the past. Going back to KiCad V3 would be a quite horrible experience!

The interactive router has it’s own dialog with some settings, accessible via PCB Editor / Route / Interactive Router Settings 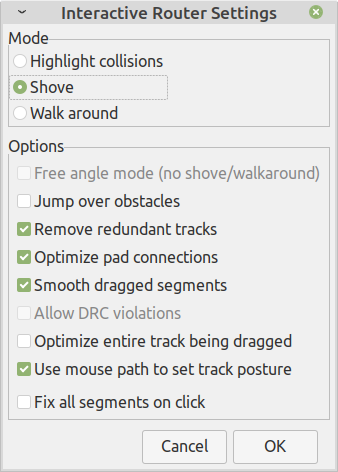 Experiment a bit with those settings. I guess you want to turn on Fix all segments on click (Which is a quite new feature).

The last issue I am having (though this is one was also present on V5). Clicking the middle mouse wheel in order to pan sometimes result in unwanted zooms. This is rather inconsistent.

This issue is probably “Mouse and Touchpad” settings in “Preferences”.
With “Center and warp…” ticked, even the smallest amount of wheel rotation whilst holding down the wheel will introduce zooming. Don’t dismiss this feature too readily, as, when understood, it is a great way to pan and zoom simultaneously.

Hope that this feedback is a bit clear/usefull? Or is it needed to make a video?

Hi, it’s very useful, but a video and a board file showing the issue would be even better. Could you make one?

I’ve been experimenting a bit. and it seems that if the mouse is moved during a click (the period the button is depressed) then KiCad does not accept it as a final track location.

If I deliberately move the mouse during a long click, it never registers as a track location.
If I hold the mouse very still and then click it does not miss a location.

To me it feels like a bug. It’s quite common to fix intermediate points in approximated locations with the only goal of the interactive router not having a long trail of unfixed track segments.

So it’s a bit similar to rotating the scrollwheel when you only wanted to click the middle mouse button, (Althoug in that case a separate and real function is activated). Some mice do not have “bumps” in the rotation of the scrolwheel, and that does make it more likely to fail in this way.

I never use the “pan with middle button” myself. It took me some time to get used to the “Center and warp cursor on zoom” function, but I’ve become addicted to it. For panning I usually move the mouse a bit in the direction I want to pan, then pull the scrollwheel one click back, which puts the cursor in the center, then move the mouse to were I want to be and push the scrollwheel one click further, which brings me back in the same zoom level and with both the cursor and the area of interest in the center of the screen.

Unfortunately there are cases Interactive router is struggling to find proper path, while in V5 it solved similar tasks without hiccups.
The workaround might be to switch the Interactive router from Shove to Higlight collissions mode, which is less automated but does not exhibit such performance issues.
Probably there are some corner cases that cause the router to struggle solving the track in V6. For sure it struggles when the track hits rounded edge, but other cases are not that obvious.
Please post the screencast as @twl requested, it definitelty will be helpful in isolating the issue. If possible, also attach the project stub that allows to reproduce the issue (although gitlab probably would be more suitable place for these).

“although some of the changes are really for the worse.”

Well this precisely. I will never forget my first experience with W8…

You also have to realize there can be no progress without change, and I’d rather live with the many improvements and make some mental adjustment here and there, than to stay stuck in the past.

I know, I am an assembly SW engineer. I often have to delibarately break something before I can make it better. I also don’t blame anybody or anything. Bugs are like a law of physics, the natural order of things…

IMO it depends per subject really. If I am happy with the tooling I have and I can do everything I want, I happily postpone pressing the update button until the last possible moment. Especially if I don’t need any of the new features. If it would be up to me I’d still be running Windows XP at this time

I will post a video at my earliest convenience

The problem however is not always persistant. Sometimes it isn’t there. When it is there, I also notice that my high end gaming PC is having a hard time with PCB new.

@fred4u Don’t put an at sign in front of a handle if you just want to reference someone else. The forum software does not only add a fancy grey background, but it also alerts the person mentioned, and I’m sure that was not your intention in this case.

video is still comming, I did not forget. Wife is going into labour soon…

As excuses go, this is a pretty good one.