This library is a modification of the vanilla KiCad library, changes include:

Some of the new footprints in comparison to the default KiCad: 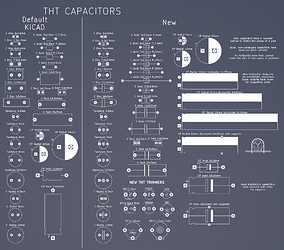 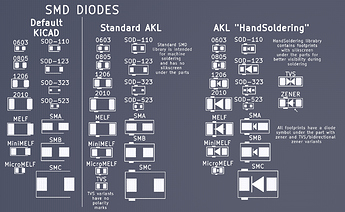 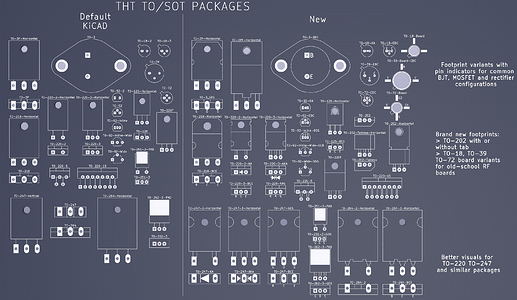 You can get it here:
GitHub: 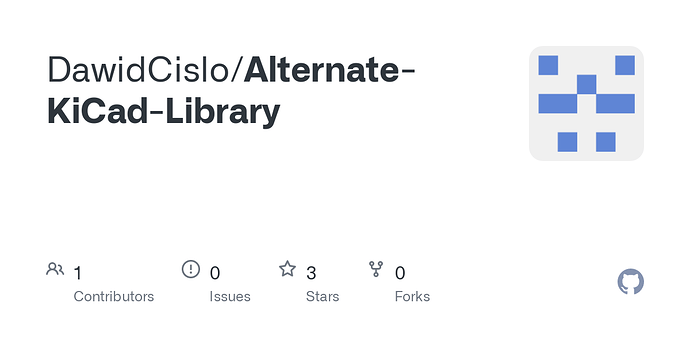 Contribute to DawidCislo/Alternate-KiCad-Library development by creating an account on GitHub.

Why not contribute to the actual KiCad Library?
Alternate KiCad Library deliberately violates KiCad library convention by placing silkscreen under the parts. I believe it helps during hand soldering and makes the bare PCB easier to ‘read’.
Also some AKL footprints take physically more space, so there’s a strong argument not to use it in high density designs.
SMD parts with silkscreen under the part might cause problems during machine soldering.

This library has been a personal project but since then I’ve expanded it far beyond of what I originally set out to do. And that’s not it! Symbol libraries are planned to release some time after KiCad 6 comes out, along with more footprints both modified and brand new. See the showcase folder in the links above.

Please keep in mind that this library is a spare time project of a single person, there might be bugs and new updates will take a long time.

License:
Alternate KiCad Library by Dawid Cisło is a derivative of KiCad Library made by KiCad community, used under Creative Commons CC-BY-SA 4.0 License, with the following exception:

To the extent that the creation of electronic designs that use ‘Licensed Material’ can be considered to be ‘Adapted Material’, then the copyright holder waives article 3 of the license with respect to these designs and any generated files which use data provided as part of the ‘Licensed Material’.

Additional license and attribution information can be found in the ‘Readme’ file.

If you think that licensing or attribution information included in the AKL files is inadequate please contact me.

Please let me know if I need to move the topic somewhere else. I could not find a proper category for it.

These look really good! I’m perfectly happy with silkscreen under the components, for the reasons you give. Didn’t I read somewhere that it can lift small SMD devices off their solder pads, though?

I never thought of that, I could release a version with no silkscreen under SMDs if there’s a demand for it. I primarily thought of hand-soldering when I worked on this library, so be cautious when you use those in production.

I wouldn’t recommend footprints made primarily for hand soldering to be used in machine assembly/soldering at all. They may mostly work but still have larger failure percentage.

On the other hand, the smaller the part the more critical the footprint is. The smallest here seems to be 0603 or one of the SOD packages and it’s possible that the silkscreen isn’t critical for them. With about 0402 or smaller I would use only well tested or standard conforming footprints.

Nice library, I think many would find it useful. You should upload it to github or gitlab though, it will make it much easier for others to keep track of updates. It’s also more trustworthy download source than random drive links.

New update is here.
SMD libraries have been split into two variants, one is intended for machine assembly, and the other keeps the silkscreen under the parts for hand soldering.
You can easily swap between them by using ‘change footprint’ option and renaming the library in footprint properties.