[already solved] Carving out space in a plane?

So I’m redoing a batch of boards I’d laid out with “assistance” of an autorouter and a cumbersome workflow that involved exporting from and back into KiCAD… but I digress.

When doing manual placement of parts and layout, I managed to get what I THOUGHT was a good parts layout, but I am almost out of options for making the last 11 connections on this board. I am forced to consider carving a hole into the 5V plane to get the needed room for those last few jumpers.

Doing a “keepout” zone doesn’t do it, as DRC then throws a fit about all the vias within the zone.

Here’s the board. Suggestions welcome. Either how to carve out the needed hole in the 5V plane or if there are parts / traces that should be moved…

When you create the keepout, just check “keep out copper pours” and uncheck the default options of keeping out tracks and vias. This should get rid of the DRC problem, unless I don’t understand the situation.

…this is where I facepalm for missing an obvious option on the dialog box.
Thank you. Think that should suffice…

I don’t quite understand, most of the board is empty and you have a 4 layer board with two planes without traces. Few traces to go. Just draw them using vias with which you jump between the top and bottom layers. There’s no need to use the plane layers.

The board could probably be made with two layers and it would be much cheaper. The price isn’t so important if you will order only a few pieces and want to spend 5x or 10x $.

I’m well aware of the cost differential between 2 and 4 layer boards, but as you can see, I’m not that great at board layout…

as you can see, I’m not that great at board layout…

The main problem with your layout is that you don’t stick to “top horizontal bottom vertical” paradigm. Or vice versa. If you try to re-route that tracks on the side are predominantly in the same direction you will find out that you don’t need additional layers for tracks.

The main problem with your layout is that you don’t stick to “top horizontal bottom vertical” paradigm.

I’m not sure it’s any problem. That strategy is probably good in many ways, but it’s not necessary or even very usefule for routing this board. There are so few of remaining unconnected pads that it’s easy to just route them randomly, jumping over other tracks by using vias. H/V paradigm would be reasonable if the layout would be remade from scratch without autorouter. It’s up to Meterman to decide if it’s worth doing. But using the plane layers for routing certainly isn’t needed here, I don’t know where that idea came from.

I certainly didn’t want to bust into the planes, but I was simply running out of room.
Those 5 traces I put down in the one plane layer actually do bug the daylights out of me.

I might try again and see how well I can keep it to horizontal on one side and vertical on the other.

TBH, I would love to do this as 2 layer.

One of the other boards (P/S) was simple enough to do as 2 layer from the start, and another (display) was four layers, but it didn’t take long to knock it down to 2 layers.

In the absence of full plane layers, what do I need to keep in mind in laying out the +5 and ground buses? I figure that I need to have the bus traces heavier than the default width - but by how much?

If those 10 ratsnest lines are the last that must be done then there is plenty of room to route them. 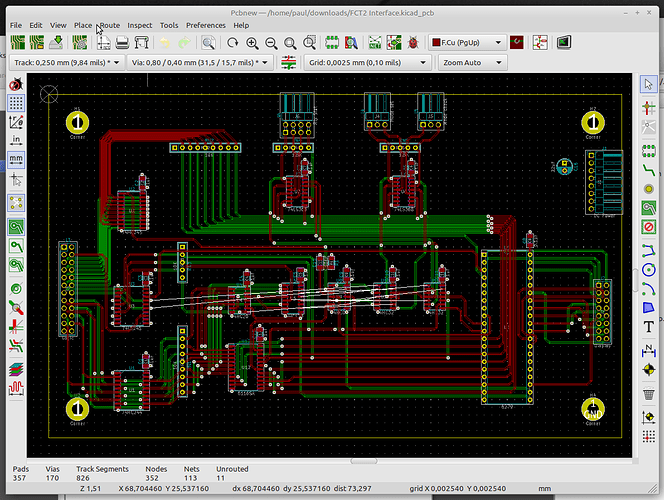 When considering 2 versus 4 -layer PCB, the cost of the PCB is not your only concern. Two layer PCB’s take significantly more design time to do right.

It is a lot better to spread this capacitive coupling by randomizing the order of adjacent tracks.

There is also a lot to say about component placement. For example, if you put RN2 and U8 right next to each other, then the connections between them can be just straight short tracks. It also does not make sense to run all those tracks to the East side of the PCB just to get them to U8, and then run them back all the way to the west side.

Consider for example the difference by just rotating U8 90 degrees and put it in the North-West corner just above RN2.

If possible, then also put display connector J2 in that same corner, and then your PCB will be almost free of long tracks.

The rest can be squeezed in between, but maybe move all the footprints around the center a bit easwards to make more room in the South-West corner.

Here is another thing that stands out:

Designing PCB’s is a puzzle with a pretty weird set of rules. You will get better at it if you do it more (unless you start with letting the autorouter rip. You will not get better by doing that.

I appreciate the feedback. It’s good to get a second set of eyes on a project sometimes.

I’ll go through your suggestions and see what the board looks like with the changes.
PCB layout is truly an art!

Moving J2 to the corner is not an option though, as there are 7-segment displays at that location on the display board.

I do believe the recommendation in an earlier post to arrange the board with horizontal traces on one side and vertical traces on the other to be a very good one, and am seriously considering a redo with that goal in mind (this is, after all, a ‘respin’ of a similarly sized 2-layer through-hole board).

PCB layout is truly an art!

And it starts with component placement.

I just gave the X / Y routing scheme a try after moving a couple parts and oh my… it DO simplify things!

…and that’s the truth!

I’m well into a complete redo of the board as 2-layer, and it is incredible how much easier running traces is by keeping to a scheme with X on the front and Y on the back. Half the parts have been moved around already (just have the small ICs left - need to look at swapping gate assignments and leads to find the most efficient arrangement first), but I still have ACRES of room.

Done. The overall layout may not be much better than the previous one, but it’s a 2 layer board now… 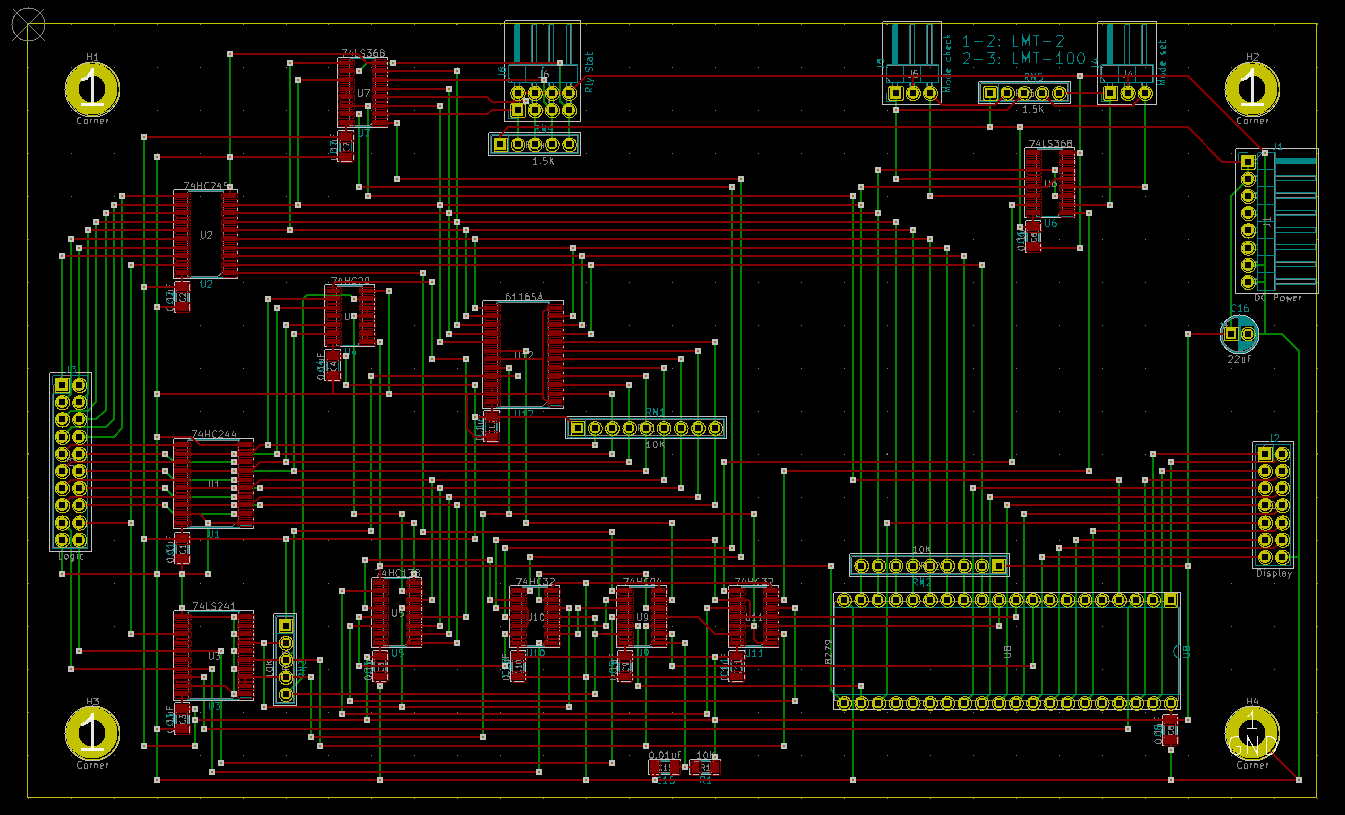 Yes, I see that. craftyjon showed me the step I missed.

Miceuz advised a different approach. I started over with only two layers and succeeded,

The completed two-layer board is illustrated in the post prior to yours.

Anyway, the information given is useful knowledge for future projects.