In the schematic editor, I often place text items for table of contents, or mechanical parts BOMs, etc. Through out the design process one appends to these lists.

I have not figured out a way to make the top stay at the top, and as one adds entries to the bottom of the text, the top position stays the same, and the lines are appended. At the moment the block moves up to stay center justified. Then one must correct the position. Is there a way to set vertical alignment top for text in the schematic editor? 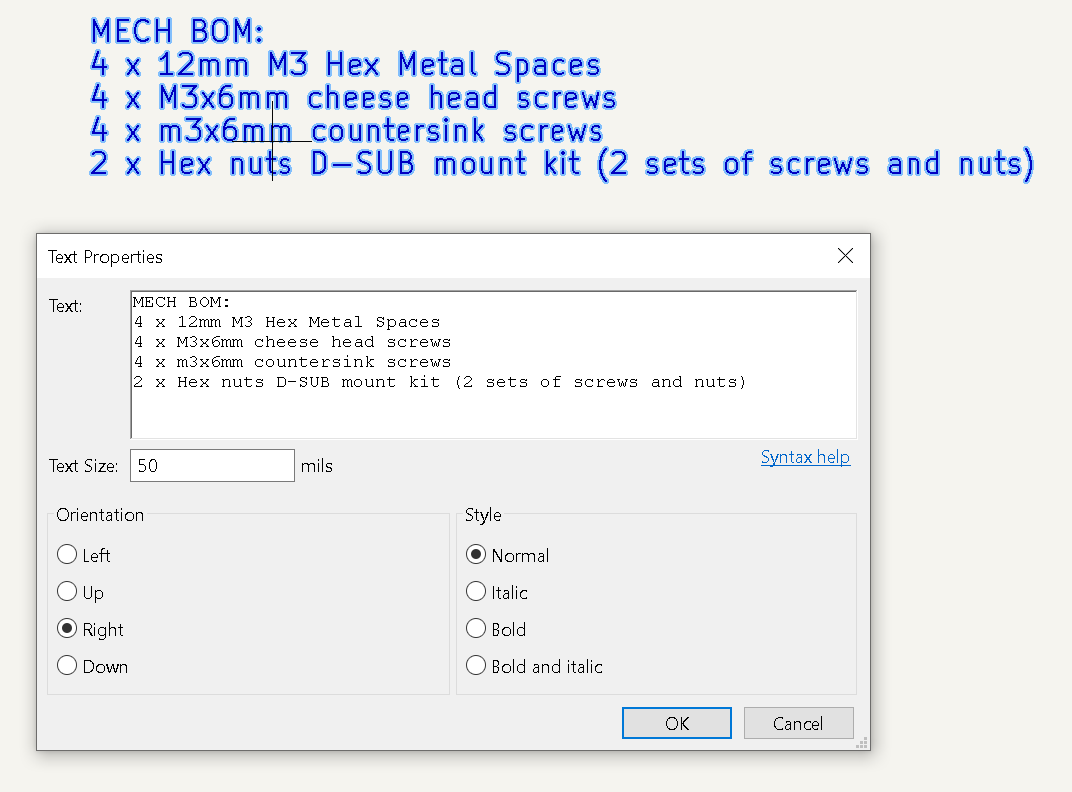 I also do not know a method of doing this.
I’ts one of the small annoyances in KiCad.

A little table would be very nifty, great idea!

KiCAD has come so far that these are the small things we wishing for now, well down to the KiCAD team!

Somewhere in the '90ies microsoft introduced OLE, whic stands for “Object Linking and Embedding”. The Idea was that you could mix and match objects from a different programs. For example you just put a spreadsheet in the schematic, and when you double click it, your OS starts the appropriate program to edit that spreadsheet.

I tried it once or twice.
After double clicking you had to wait about two minutes during which your HDD was constantly busy, and then you had a spreadsheet program with your data.
Back then it did not work because of performance reasons, but the concept at least had some merit.
But for the last 20 years or so I have not seen this concept applied anymore.

Another problem with this approach is that you make different software programs interdependent from each other. You won’t be able to edit the spreadsheet in KiCad anymore, unless you’ve got some compatible office suite installed. On my Linux box LibreOffice gets installed by default, just install the OS and it gets installed too.

But in general I have not thought much about this approach.
Maybe there already are plenty sort of headaches for developers for managing and upgrading libraries used in KiCad itself. Adding things like this may be a software nightmare.

I think mentor graphics pads does that with their tables, and I think it is very much not the way to go. We would just like simple tables, not a huge spreadsheet app to load when modifiying a little note. The more external dependencies, the more things tend to break.

This has been noted on the bugtracker - you can always upvote it.

Description It would be very helpful if you could add a tool for inserting graphical tables into a eeSchema schematic.