There have been many posts from Kicad users who, after installing Kicad, find there are no libraries.
Often, this seems to be a case of incorrect installation, but to reinstall or just alter the installation, the configuration files need to be first removed.

@eelik wrote a FAQ explaining where config files are, but I think it would be a good idea to have a list of methods for removing Kicad config. files for all Operating Systems as a single FAQ.
These really need to be blow by blow accounts, with no steps omitted, so brand new to Kicad people, who may not be very computer literate, could follow the instructions.

I’m looking for contributions… The OS, followed by step by step instructions in point form.

Actually I think it would be better for coders who are willing to study the code to understand what role each setting and each config file in the config directory plays to develop a Python script to diagnose and fix the most pressing issues. For a start, the diagnosis function, do the checks that are currently given verbally, such as look in the library directory, do you see files there? This would be more reliable than hoping that the sufferer will follow instructions correctly.

To re-setup the libraries, you should just need to delete the sym-lib-table and/or fp-lib-table files for the symbol and footprint libraries respectively. Then restart KiCad.

Paths to the library table files are given here, and maybe elsewhere in the documentation as well. Getting Started in KiCad | 6.0 | English | Documentation | KiCad

I didn’t feel like doing hardware yesterday so I coded up a checker to scan a user’s configuration. It looks at 3 files, kicad_common.json, sym-lib-table and fp-lib-table and reports problems. You can find it at https://github.com/retiredfeline/kicad6cfgchk There are clone and download options from the Code dropdown.

Limitations: You need to install the sexpdata Python module if not already installed for handling S-expressions, say with pip3. It only works for Linux at the moment but I’ll fix that when I find out what the configuration directory and system libaries paths are for the other 2 platforms.

Have at it and I’ll see about the other platforms.

I’m feeling a bit embarassed here.
I can’t escape the feeling that my whining and complaining over the last week has brought on this discussion.
I found the root cause (the error on the kicad.org Ubuntu page) and it’s been addressed. My installation is running well now.
Updating the documentation and FAQs and “Tips&Tricks” might be the better option. But it’s up to you.
Thank You All.

Nothing to do with you. I just needed some programming practice and it could help future users. It shoud diagnose other kinds of problems such as undefined environment variables. The most difficult part of the exercise was anticipating problems that could occur in config files when I have none in my own.

Don’t.
A search of the forum will result in a large number of “where are my libraries” problems, and nearly all are installation problems.

Thanks, that took a load off my mind.

Concerning the current topic: here’s an input from this user:

Resetting the configuration files is fine, but think about the custom libraries.
Each and every custom library has to be loaded manually afterwards, and that’s incredibly tedious.

Resetting the configuration files is fine, but think about the custom libraries.
Each and every custom library has to be loaded manually afterwards, and that’s incredibly tedious.

When you’ve messed up the config badly sometimes you need to hit the factory reset button to get a fresh start.

Personally I think the problem stems from the choices presented at the first run dialog. There were a couple of choices other than the default which some users looked at and thought I have personal libraries so that’s me! I think it should have installed the default system libraries anyway and then presented the user with the options of migrating the non-system libraries.

The other reason I coded the checker is many software suites have some kind of configuration checker to show whether the installed configuration makes sense. KiCad shouldn’t be an exception.

These really need to be blow by blow accounts, with no steps omitted, so brand new to Kicad people, who may not be very computer literate, could follow the instructions.

The location of the symbol and footprint library table files depends on operating system.

This comment only addresses the actual library table files but not the path to them… more confusion for the newbee.

The paths can be found in the Configuration paths, but again, how is the newbee to know that?

To me, the instruction posted by @retiredfeline in another post is GREAT!
Asking a Ubuntu newbee to blindly type or paste this “rm -fr ~/.config/kicad/6.0” into the terminal, restart, then select "copy default… (recommended), after opening Kicad solves all the problems of the installation.

Personally I think the problem stems from the choices presented at the first run dialog.

This comment only addresses the actual library table files but not the path to them… more confusion for the newbee.

The location of the library table files is given in the link I gave. The library location is not given explicitly.

I do think the documentation should be improved so it’s clear in all cases how to properly install KiCad, but it’s not clear to me yet what the deficiencies are.

For an incorrect installation there are no libraries in the “Preferences / Manage Libraries” so their location needs to be given explicitly.
The instructions read :

which is difficult not knowing their exact whereabouts.

Personally, I’m with @retiredfeline
The installation needs to automatically include Kicad symbol & footprint libraries. If they are not required by users they can be very easily inactivated or deleted from the “Manage Libraries” lists.
This would render this installation problem, some have, as obsolete.

How much clout(influence) do you have with the developers, gkeeth?

Perhaps I’m not understanding you. The location of the symbol library tables (sym-lib-table and fp-lib-table) is given directly following the line you quote.

It’s true that the installation location of the libraries themselves (ie the .kicad_sym and .kicad_mod files) is not given, but I don’t see why that’s relevant when the goal is to delete the library table to re-run the library setup.

How much clout(influence) do you have with the developers, gkeeth?

No more than anyone else, but I did write most of the guide, which is why I’m focused on it

This is what the table looks like with an incorrect installation: 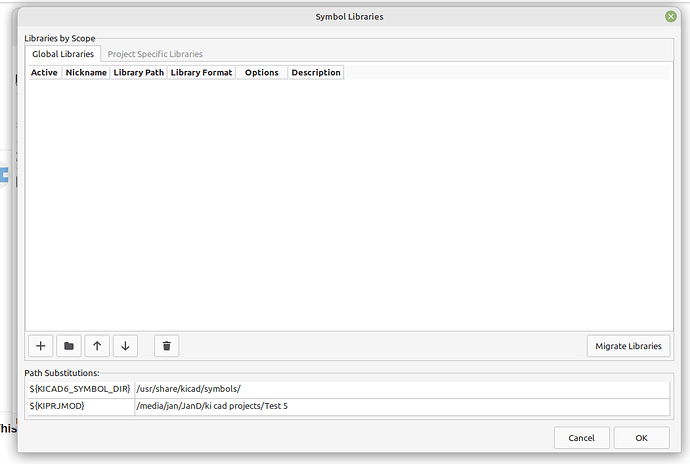 What should be deleted?

but I did write most of the guide

A lot of hard work and very well done. Thanks for the effort.

This is what the table looks like with an incorrect installation

The user did not select the correct library table when kicad prompted for which one to use (default one from the libraries, browse to a user one, or use an empty one).

I hope the paths for OS/X and Windows are suitable for 6.0 but let me know if they are not since I don’t have those OSes here.

Thank you! I had the same issue - no libraries. This FAQ helped me during reinstalling.