I have encountered a situation with groups where I cannot edit the properties of a selected group. Specifically,

The action doesn’t appear to change anything though the group is selected. My assumption is that when I select a group I have also selected the individual members of that group but this does not appear to be the case.

Is there a way to achieve this in 5.99? If I ungroup the items and then select them individually I can make the edit but that really limits a potential useful utility of grouping.

Thank you for the suggestion. That seems to have done the trick. I find it is a bit tricky though when there are nested groups.

There may be other use, too, for “Enter Recursively” or something like that. I don’t know if that’s logically possible, I’m not very familiar with grouping.

This whole grouping thing is quite new. It is a feature only in KiCad-nightly V5.99.

For this recent thread:

Hi, I am testing Kicad 5.99 and I cannot find a quick way to move imported graphics (from a dxf) in other layers. Actually, this function is accessible editing a single item (e.g. segment or a polyline) but not a group of them. Maybe it is my fault and there is a way to do it. In the latter case it would be nice to expose better this feature (maybe pressing E after a group selection?). BR

I also found a way that did what OP wanted, but it feels like the functionality of editing and/or working with groups can be improved.

With groups you also have the problem that it can contain different sorts of items. For example, if I select a pad and then press e for edit, I get to edit Pad Properties: 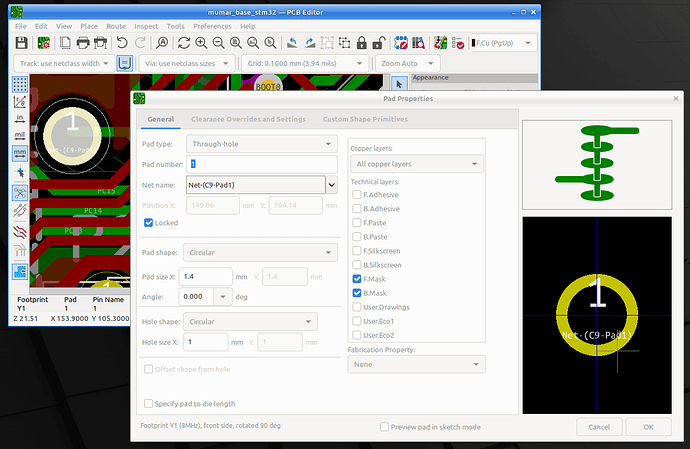 … and if I select a track and press e for edit, I get to edit Track & Via Properties: 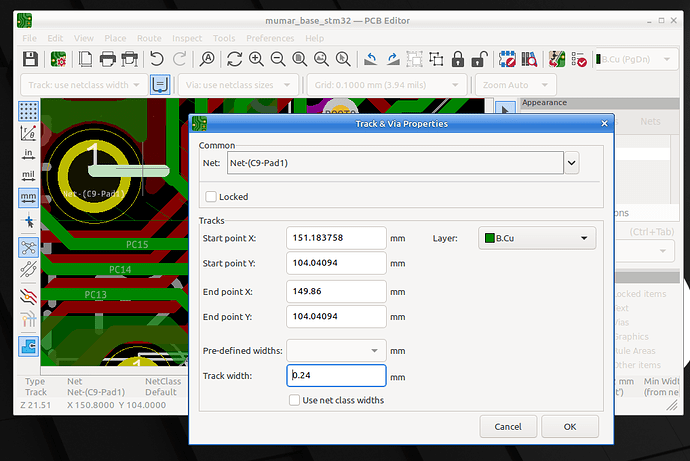 However, if I select both a pad and a track and press e, then KiCad appears to get confused and it does not know which dialog to show. 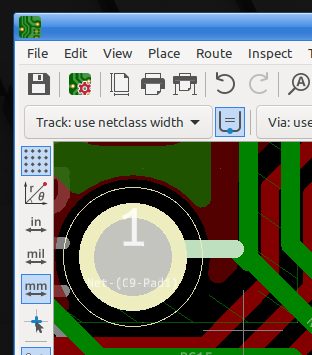 I assume that the grouping is just a method for making the group, and it only affects the way things get selected, and it does not change the way that operations on a selection work.

From a UI perspective, why is it necessary to “Enter Group” in order to do an operation on the members of the group? Seems more logical to treat it like a selection?

I experimented a bit more, and by selecting a group (without entering it), and the settings below in Pcbnew / Edit / Edit Text and Graphics Properties 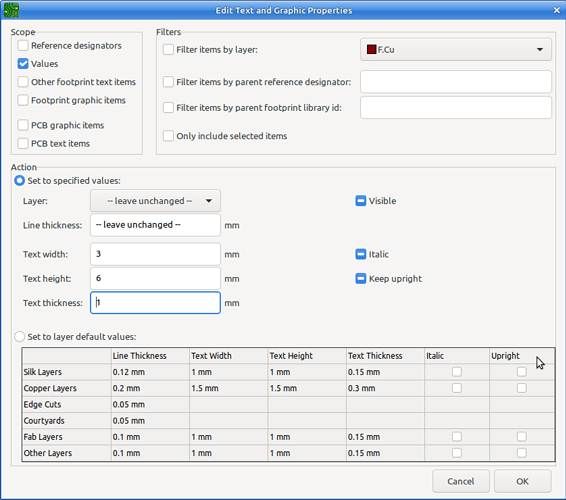 The Values of both the connectors got changed to some big & Fat text. 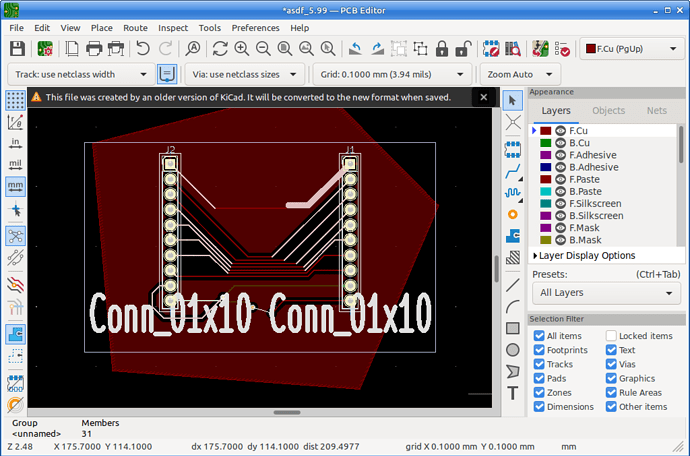 So it is possible to change a few items of a group without first entering the group, and also if that group has other items (footprints, tracks).

I think @JeffYoung is responsible for the original groups implementation and might be interested in usability and other issues.

Yes, I believe there may be a couple issues though.

First, if you do not select the “Only include selected items” filter to limit the action, then your action appears to affect other (unselected) components on the board as well.

Second, if some of the components are in a nested group, they are unaffected.

BTW, this is a great feature. I can see how this may be adapted down the road to do things like replicate layout.

I just followed OP’s description to the letter:

And it indeed does not work. It does work however if you omit the Only include selected items in Filters.

I guess that in combination with a group this dialog works on the whole group, and with the Only include selected items in Filters, there must be a separate selection inside the group for it to operate on, and therefore the necessity to enter the group and select things. (Oops. Read on)

But I have no idea how well tested or how well thought out this part of code with the grouping is.

First, if you do not select the “Only include selected items” filter to limit the action, then your action appears to affect other (unselected) components on the board as well.

Indeed. I can confirm this.
For me, the logical behavior of Pcbnew / Edit / Edit Text & Graphics Properties … with Filter / [v] Only include selected items and a group is selected, that it then would operate on all items in the group. And this is not the way it currently works.

I think @JeffYoung is responsible for the original groups implementation and might be interested in usability and other issues.

No, I just seem to have gotten stuck holding the bag.

If someone could log a bug with a sample file I can fix it, though…

Sample file and bug report made.

Selections with Groups do not work with "Edit Text & Graphics Properties...

Description When a group is part of a selection (or only the group is selected), then Pcb Editor / Edit /...