Why so little and mostly old videos on youtube?

Why only a tiny bit of serious videos on KiCad on Youtube, and often old ones, compared to other cad software like Altium, Cadence, Eagle and maybe a few more?

Well, what do those three you mention have in common, I wonder?

There have been a good selection of tutorials - some can be found in this FAQ post - you are, of course, welcome to curate more or author your own.

KiCad changed a lot between 4 & 5 but has changed massively between 5 & the forthcoming 6 i.e. the current 5.99 ‘nightly’ builds. This process has taken some time - There are only a few developers. I think that potential content producers have wanted to see a more finished version before producing more resources - for instance, all the icons have been changed a few months back. It would have been galling to have produced materials which then don’t look anything like the current product.

There is also a need for non-video tutorials, as many office firewalls block YouTube as a policy

While I cannot deny that videos have some use, I do not particularly like them for most instructional purposes and I really wonder about advantages for instructing on software such as KiCad. Also I think that making videos might be its own skill which often may not correspond to skill in using CAD such as KiCad.

Is there any way to put together an informal poll on how many users of this forum like to use videos for learning software?

I have started a poll here

In this post @bobz suggested a poll might be interesting to see what media are preferred … so, here is a poll… (This may not work as its the first time I’ve tried this feature!) I fully expect a mixed response and I have a feeling that there are some areas which benefit from sitting down and reading through to understand and there are some features which you just need to see a quick demo. Anyhow, here goes; What format do you prefer KiCad tutorials to take? poll

That was a cool idea.

How many beginners tutorials do you need for KiCad?
I tried to narrow it down a bit with: https://www.youtube.com/results?search_query=kicad+tutorial+for+beginners

But still I just stopped counting after 500 video’s.

I did watch one video tutorial from “atomic14” 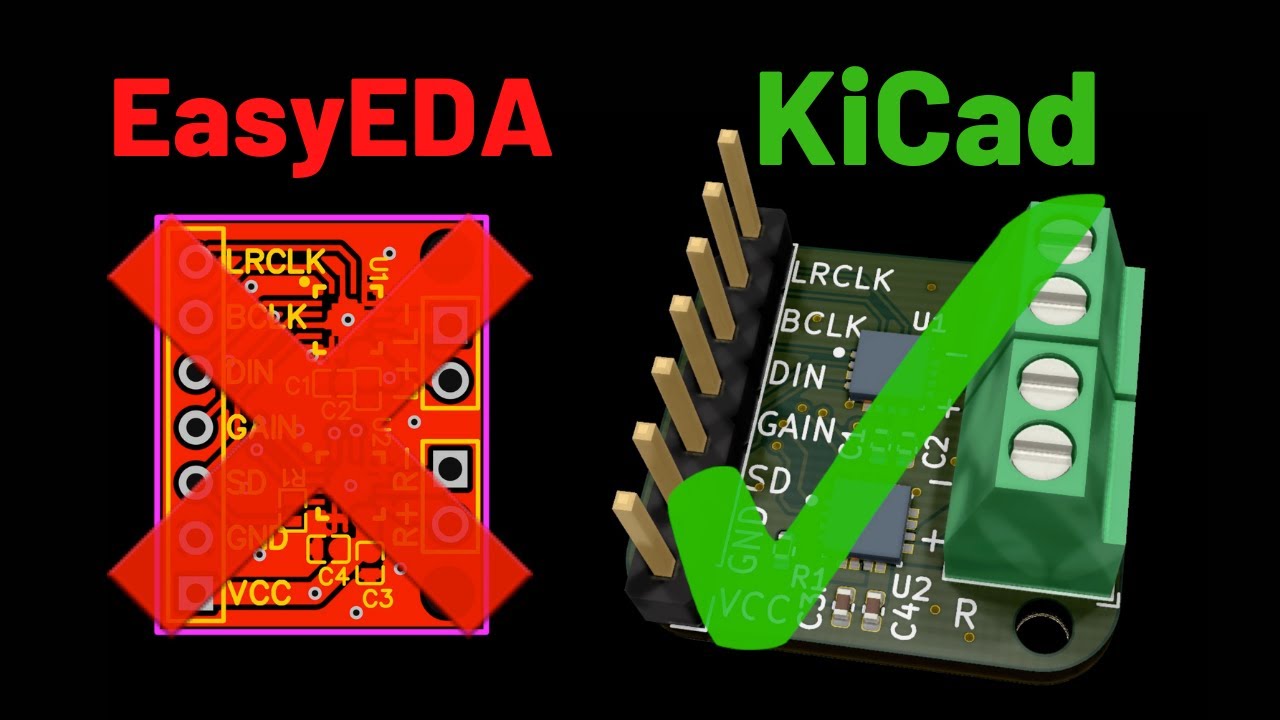 I do not like the pace of his video much. It’s sped up a lot skipping a bunch of details that are interesting for beginners, and maybe those sort of video’s are better suited for a younger generation (I’m feeling old and slow now).

This video has accumulated 26767 views in almost 3 months and is by far his most popular recent video with an average per day of:

He clearly is a beginner with KiCad himself.
(Or at least was three months ago).

Also,
I refuse to open a youtube account because I do not agree with youtube’s eula.
I made a bunch of remarks on his video, and keep these in mind if you watch it.
(Maybe can someone send him a ping about this, or PM me his e-mail address from his youtube channel?)

I’ve also heard rumors that some people are working on video tutorials for KiCad V6, and those will probably released at the same time or after KiCad V6 itself.

Perhaps I am in the vast minority (??) but I do not use net classes much. I am seldom working with voltages > 50V recently. Also I think the net classes do not address voltage differentials, such as the voltage difference between two ends of a current sense resistor which operates with a common mode voltage of 500V. Usually I limit my trace width to slightly less than pad width or whatever will fit where it needs to fit. Often I will tweak the width of individual track segments to fit.

One recurring theme I have in working with pcb designers is (in 99% of cases) to not use a track width that is unnecessarily narrow. Rare exception may be where capacitive noise coupling on the pcb is an issue. OK (disclaimer) I do not design controlled impedance. I don’t think the pcb fab houses are paying for etched copper, and fatter traces slightly reduce layout inductance, reduce chances of problems with mechanical damage to the pcb.

I regret asking this question. I understand now there is plenty of videos available.

I do not particularly like them for most instructional purposes and I really wonder about advantages for instructing on software such as KiCad.

I have attempted to write some instructions and it is a painful process that doesn’t necessarily result in great instructions. You quickly realize a video demo is much more useful than long text descriptions of menus. As winter is coming I hope to get time to work on some training videos.

Yeah yeah yeah – video demos rules! – I look forward for those videos, and yeah again I know it’s not easy to make them, go go go for them!

I moved from eagle 5 to KiCad recently, so I‘m not an EDA beginner, but new to KiCad. Without the videos by Chris Gammal from contextual electronic I‘d have gone lost. Straight to the point, focused on one bit each video, speedy. To me it’s the most effective way to learn and understand. I guess absolute beginnes will take benefit aswell.
A lot of videos are not suited to to teach you, as there is a lack of preparation, didactic concept, pace.
Are videos helpful? Yes, if you find those that fit your needs!

I am convinced that in a general sense the usefulness of video’s is very personal.
Different people learn best from different sorts of input. I’m even suspecting that the way “thought patterns” are organized are different in between people.
How would you explain how your “thought process” works to someone else. How do you compare someone else’s thought process to your own?

For me, watching video’s do not work well.
I much rather prefer a written text with some pictures here and there which I can work through at my own pace, make notes, read some sections again if I wish to.
I really liked the “Getting started in KiCad” guide. With that I made my first KiCad project from concept to PCB in a single afternoon, and later I used it as a reference to refresh parts that did not stick to my mind the first (or second) time. I find it quite sad that it has become obsolete in the form it is now, but at the same time enjoyed by the leaps forward that KiCad made in the last 5 to 7 years.

For a few months I’m putting some more effort into getting to grips with KiCad-nightly V5.99, and when I’m doing something in KiCad V5.1.x it’s starting to feel “old” and “outdated”.

Making a text/ figure based html tutorial is hard work.
Making a video seems much easier.
Making a good video where each step is clear is also hard work

I much rather prefer a written text with some pictures here and there which I can work through at my own pace, make notes, read some sections again if I wish to.

Yes for me an issue is how to find a particular bit that I missed? In a long text document I can probably search text. I guess the best comparison is recipes: video versus text form. If I need to cook something and have only the video recipe, the first thing I need to do is to somehow play it back and forth and write it down. The video can be a nice addition where some technique might be important.

Any thoughts of “crowdsourcing” parts of the manual? I would be willing to have a whack at aspects that I know, to contribute or at least as a way to find out where the difficulties lie.

Writing good documentation and instructions is hard. It requires a good grasp of idiomatic language, good descriptive skills and a deep understanding of how to perform the task being described. I am sure that when some people discover how hard it is, they think ‘i’ll just do a video’ and shoot an unscripted, unedited, poorly lit and out of focus video on a hand held phone and post it on YT. As @davidsrsb says, the fact is, good video is just as hard as written documentation with an addition skill-set of video production required.

Recently, I had a problem with a mower. The only video I could find helped solve my problem but it was laughable. Some random dog made an appearance to the annoyance of the narrator and he didn’t have a torch at the right moment. He loved the sound of his own voice but the info could have been conveyed in 30s but the video took 12mins. It had the advantage that it showed the exact adjustment tweaks needed but it was painful. One still from the video was actually all I needed. Also, it is not always convenient to listen to a narration. Some video producers eschew any narration at all and have a background soundtrack of their (bad) taste in music which doesn’t even allow you to use the closed caption facility.

Personally, I like to have a reference document to read, re-read and to refer to. I expect that part of this is a generational thing (like understanding nested folders!). I am old enough to have used printed material as my primary study material at school and university. I know where to find things in the document and have a mental image of the page I need to look at. It is also a lot quicker to skim read a document than watch a video - I can flick through maybe a hundred pages of more in a few minutes skipping over stuff I know and identifying areas I want to refresh in more depth - this is harder in a video.

I do like short instructional videos when the include maybe some diagrams/graphic, background data, maybe a selection of clips to camera interspersed with short video clips with clear narration in small incremental steps. These are difficult to do well and require proper editing.