I guess I should have asked about the goals of the project before I started to learn KICad. It seems like a large amount of work just to target a niche user base that is willing to implement the daily builds. And as devbisme states, it seems counterproductive.

Releasing them here is a possible solution, but a lot of work for a small number of people. Just preparing the documentation for the release will be monumental.

Well I think the thing to realize is that you don’t lose a whole lot by going back to the previous versions of KiCad. I made all of the videos on BZR4004 which was listed as a previous “stable” build and continues to function properly. I look at it as, “If I want the shiny new features, I have to take a risk by building it myself”, which I haven’t found the need to do yet.

But the projects saved in bzr5xxx builds aren’t compatible with the bzr4004 anymore. So no going back track will be offered…

Chris, I get that and perhaps I just need a little cheese to go with my whine, but I was looking for KiCad to be a part of my hobby, not a hobby in itself. DOS 1.0 worked but it was nice to get the upgrades. (Yeah, I’m that old)

That’s a good point and should be noted, but that means someone starting out could start on one of the previously listed “stable” builds and be fine for a while yet.

IMHO it’s not too much of a big deal that a beginner could simply start out with the last stable release (BZR4012 I believe). Most features that will be added are more advanced features which a beginner is not likely to use. The old stable release is still good enough to learn the basics of the KiCAD workflow.
So currently we could still promote the use of KiCAD at least to beginners who need to do only simple board layout.

In the long run though it should be made easier to get the latest and greatest (sort of) features by providing a known good stable build here.
Any chance we can get some software guys to help here?

Agreed, the last stable is good enough for beginners, the only thing not working anymore is the freerouting site, but there are work-arounds around that.

Well, we all know how I feel about that 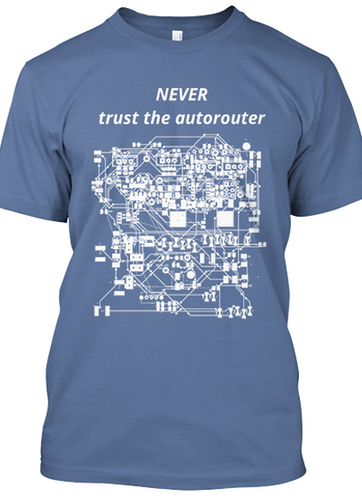 There is one fresh windows installer floating around the net since few weeks.
I tested it rapidly and didn’t find any show-stoppers yet. Will it be destined to become the next “unofficial” stable or not - I don’t know.
Check this out at your own risk

Is it from @Dolganoff Is that you blog? and is the file from http://kicad.nosoftware.cz/ ?

My guess is now that both is not yous

Correct, neither one is mine!

A production CAD tool without a period o code freezing is gambling. For the user.

Is the code for the installer available?

The installer might be part of “kicad winbuilder”. Linux user here, so I can’t tell you much more than that. I’m probably wrong.

As far as I know winbuilder doesn’t contain any installer creation tool. I am using it to build win versions from time to time, fo my class room.

I also use GNU/Linux.

Chris is that T-shirt available?
Jim

A new release will be released, don’t worry. Currently work is being done in making daily builds available on the major platforms, such that every user do not have to rebuild themself, for easier testing. The new releases will be lightweight releases, meaing that you should grab a new release to update and no backports are made.

Also devbisme, the reason for not releasing stables, is there has not been enough resources to mandate time for such, and the goal is to provide nightly builds to ease the bug fixing and reporting for developers and users. So Chris, the goal is not that everyone should build from source as you suggest.

devbisme, there are some unittesting tests available in the qa directory which is using the python scripting to perform tests, currently only available to pcbnew, which is the most actively developed component currently. You are welcomed to design unit tests.

A contributing reason to no release for some is the KIWAY [3] work and other new features, that needed to stabilize a bit, which I mean they have. There are bugfixes in every week, the project is very active.

Also, as I understand it, the release will be after the new features form Tom is mergerd [2]. In this regard, I will encourage people to donate via the donation page CERN has setup, specifically to support Tom and Maciej, not to forget the main developers of KiCad. There should be a mail from Wayne, indicating he wanted to wait with the release after [2] was achieved, but I can’t locate it right now.

I do encourage people to try out the latest builds, and stop using the old stable.