How to add G6K-2P-Y from github Lib to Layout

I’m new in KiCad, before I used eagle

I almost finished my schematic and to select footprints works very well, except of this relay.

Foodprint (Relay_DPDT_Omron_G6K-2P-Y.kicad_mod) for G6K-2P-Y was downloaded from official Github source and included via wizzard.

But I don’t get it…which kind of relay I have to add in schematic to get the foodprint for G6K-2P-Y?

And also a second short question. How to sync/download the actuell github librarys with my PC. Github sources are implemented but I can’t find parts from github.

This might help: How can i assign a footprint to a symbol?

Maybe this as well: What is the difference between footprints and symbols?

And this: Creating a new footprint library

And this: How can i install a specific version of the footprint library?

And for the symbol side of things (assuming you are running Kicad version 4.0.x): There should be a library called relay or relays or something similar. But it might not be added by default. Here an old topic that explains how to add the pre installed official libs either to only the current project or to every new project. Where are the momentary bush-button switches located?

And a good tutorial for kicad beginners made by the guy who brought us this forum: https://contextualelectronics.com/courses/getting-to-blinky/

But I don’t get it…which kind of relay I have to add in schematic to get the foodprint for G6K-2P-Y?

You can start with any DPDT symbol that you like. 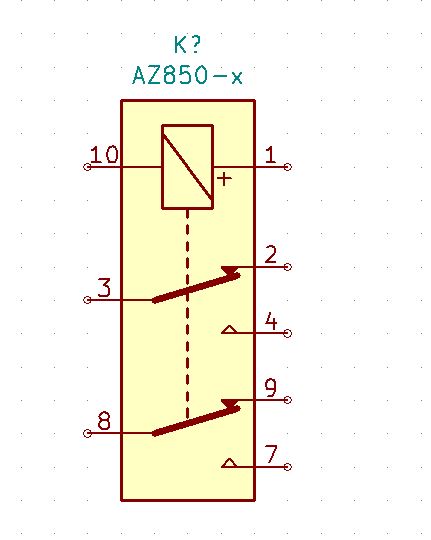 You might get lucky, and there might be a specific symbol with the exact pin designations; but I would not count on it.

Your symbol is going to have to match the pin numbers with the footprint pad numbers. 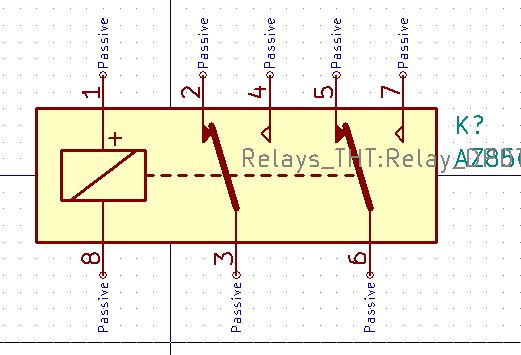 I did this really quickly, if I goofed a pin number it would not surprise me.

And, it really would not take much time to create a new custom symbol that resembles the symbol that the manufacturer’s datasheet uses.

The important thing in the finished PCB is that the pin numbers and pad numbers are correct. How the symbol looks is of secondary importance.

ON EDIT: Just noticed that the datasheet symbol is closely related to the actual physical construction of the part. The main point of the schematic symbol is to convey information about a circuit that generally flows from left to right in the schematic. The symbols in KiCad already have that function. Using the symbol from the datasheet might not allow the schematic to have the same “readability”.

I did this really quickly, if I goofed a pin number it would not surprise me.

Yep. One big goof. You have the NO and NC terminals of the switch with the pin6 pole mixed up. According to the datasheet drawing the NC terminal is 7, not 5. Very easy mistake to make, especially when rushed. Swap the pin numbers between 5 & 7 and the symbol should be good.

Thanks for all your replys.

My problem was the filter, which I didn’t noticed before. Now everything works and everything is almost finished.

BTW: I used IM00, imho it is pin compatible