Hi everybody
I need footprint for battery coin cell holder of cr2032 , the below model:
http://www.batteryholders.com/part.php?pn=BS-7-BLUE&original=CR2032&override=CR2032
I cant find this model in kicad footprints
Thanks so much

The Keystone 103 & 106 footprints for CR20xx series 20mm cells are close but not quite the same as your linked component. The pitch of the Keystone version is 20.49mm (vs 20mm) in your component and the drill size is also slightly different.
They would, however, be a very good starting point for your own version of the footprint - there is some good guidance on how to do this in the FAQ Tutorial: How to make a footprint in KiCad 5.1.x (From scratch)? and https://www.digikey.co.uk/en/resources/design-tools/kicad for some videos. Because you have the basic features already, you only need to move one of the pads and adjust the drill hole size. Then save the new footprint in your own, personal library for future re-use.

Yes, the BatteryHolder_Keystone_103_1x20mm is a good start. Pin 1 needs to be reduced to 1.17 or 1.2mm and the pitch adjusted to 20mm.
I always like to double check by measuring a sample, mechanical part manufacturers datasheets often have errors.

The name of the Keystone part is wrong if the pitch is 20.49mm, this needs checking to see if the name or the footprint is wrong.

The pitch is of the Keystone 103 is 20.5mm (according to Keystone). Is the name referencing the pitch (in which case it is wrong) or the fact that it takes a single 20mm dia cell? I happen to know that the footprint is good as i used one in my last project. 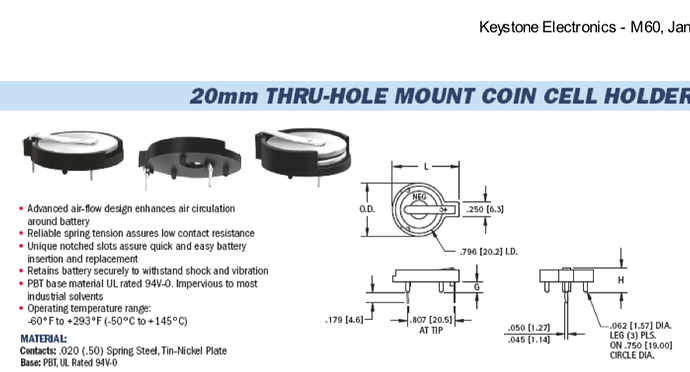 Further edit - Realise that it is only the 101 model that has sufficiently long legs to make this viable.

Thanks so much for ur answer