Copper pour with Hatched fill instead of solid fill

In my PCB design there is copper fill connected to ground net.
I can define fill area and keep outs.
I am able to fill with solid copper area.

My question is:
How do I fill with a hatched pattern instead of solid copper pour?
Where can I find option for these?

There is no automatic hatched fill. If you want something which looks like a hatched fill you will need to manually place cutouts in your fill outline.

As I may need hatched fill for partial ground below capsense buttons on intended project.
I will wait till KiCad provides these feature.

Meanwhile found a bit tedious workout was posted at
https://groups.yahoo.com/neo/groups/kicad-users/conversations/topics/16733

where in user Gerd V. Egldy had suggested following

I finally solved my problem based on your idea, thanks.
Here is how I did it:

That will work, but every time you make a modification to the wiring you have to remember to create the hatched fill zones again. Unfortunately a hatched zone is not high on the agenda either so there’s no telling when (if) it will be implemented. It’s not something which is trivial to implement either.

That will work, but every time you make a modification to the wiring you have to remember to create the hatched fill zones again.

Thanks for the heads up.
Will convert filled to hatched zone at very end of PCB design / Project completion.

Unfortunately a hatched zone is not high on the agenda either so there’s no telling when (if) it will be implemented. It’s not something which is trivial to implement either.

Will remain with KiCad and support it, till more and more advance features are implemented

Hi! My first post here! I’m one of the “victims” of the videos Chris released some time ago. Got into KiCad and i guess i’ll stick with it, as it’s getting better and better in time. In my last board design i also wanted to use a few capsense buttons and encountered the problem of generating hatched zones. I used the free version of Diptrace to generate them. Apparently, despite the pin number limit in the free version you can still import a gerber layout and use an automatic pad detection, even if it has more than 300 pads. The board i was working on had over 500 of them.
Anyway, here is a photo tutorial on how i did this. Hope it will help some of you. I’m using windows, but as far as i know there is a Diptrace version for linux and os x, so it should work on these platform too.

8.Use the KiCads bitmap converter to import the zones as a silkscreen objects and use any text editor to move the objects into the copper layers (leaving out the reference/value): 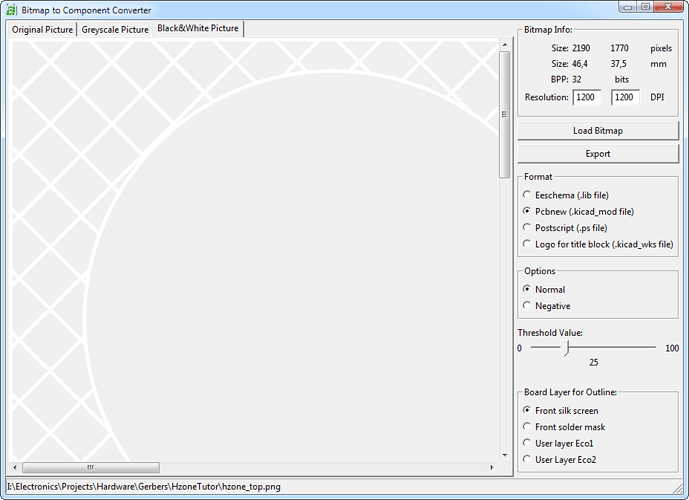 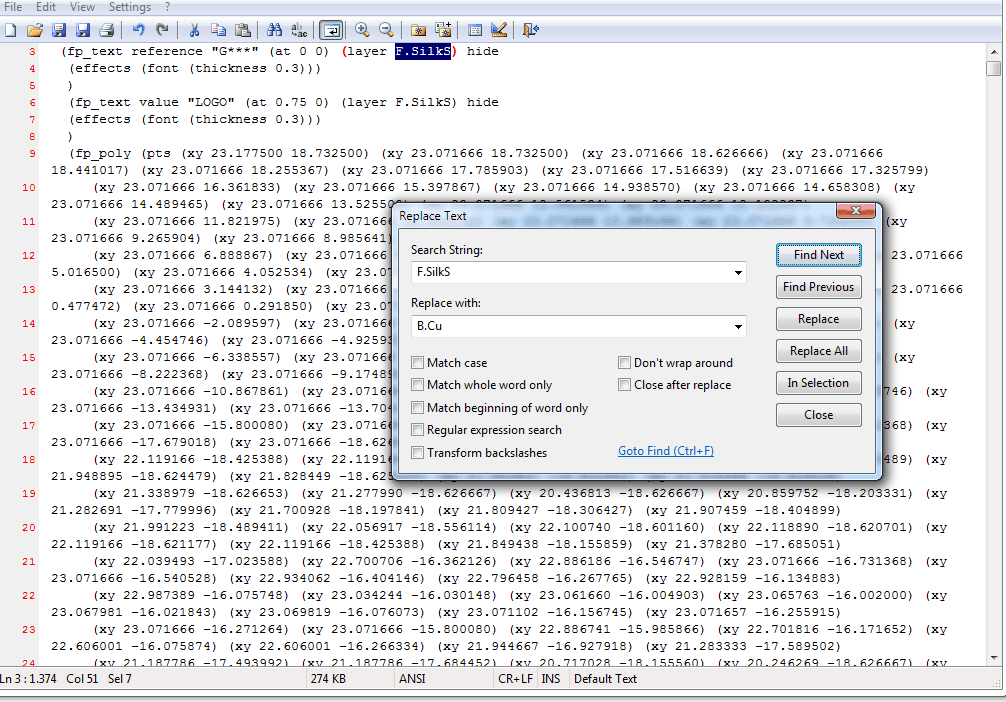 This is just an example board i do for the purpose of the tutorial. Unfortunately, in my main design, much more complex one, i found out that the imported zones were causing KiCad to crash every time i refilled the native zones. I ended up moving hatched zones away from the board for any editing. When the rest of the board was finished, zones filled up, i moved hatches back where they belong using the previously written down coordinates.
Here is the end result: 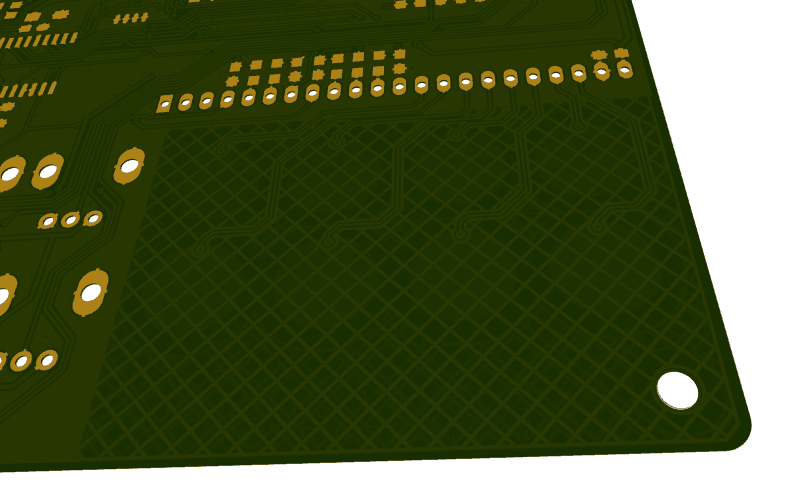 Lots of steps to get these hatched patterns… I hope someday such a feature will be added to KiCad.
Btw, i’m using one the latest builds (past 5050).

2 Likes
Can I do a hatched polygon on KiCAD
Printed silkscreen hatched area
How to draw this kind of copper area?
Hatch Copper Pour
VinayDand May 28, 2015, 3:14pm #9

Thanks for posting nice illustrated step by step hatched pattern fill work around.

Hi,
Thanks for all this great guidance. I used a combination of these methods to create top and bottom hatch planes for my project. Everything seems to look good except one thing I noticed. In the Properties sheet for my bottom hatch, under Board Side, Front is selected (although I set the layer to B.Cu using a text editor on the .mod file, and it does appear as a green object and hides when I hide the Bottom layer, as you would expect). Selecting Back on the Properties sheet inverts it, turns it Red making it part of the Front layer. So clearly I don’t want to do that, but should I be worried about this attribute being backwards? I did scan through the .mod file for the hatch, but see no clues there. 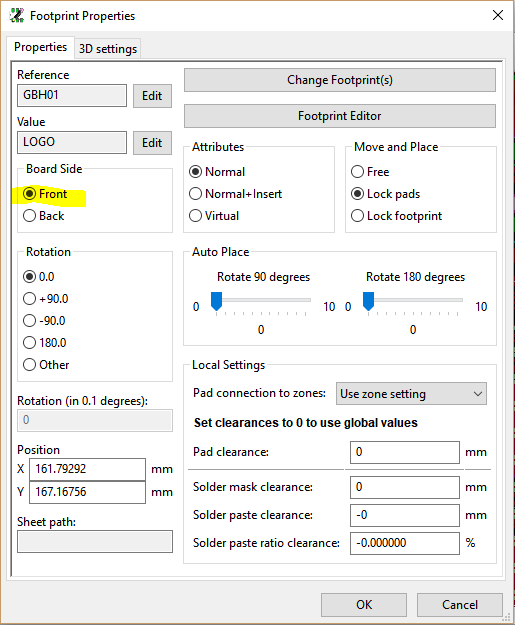 Thank you to Gerd V. Egldy (via @VinayDand) and @PzP for the diligent documentation on your methods. I don’t know how I overlooked this missing feature for so long. Now that I’ve had reason to apply hatched fills (yes, one of those picky CapSense sensors), this thread has been crucial.

That all said, I abandoned both the documented solutions! Trying to maintain control over edges and dimensions between vector export, rasterisation and re-vectorisation through 4 separate software tools just became too much. And the result is too difficult to tweak, due to the prolonged edit-preview cycle.

In the end I drew it by hand, all in KiCad. KiCad’s trace drawing behaviour is definitely not ideal for this, but actually helped surprisingly well. Being able to set a grid, copy and paste, still get track snapping, and work directly on the PCB allowed consistent, albeit arduous, progress.

See attached for the result. Like with painting, all the hard work is in the cutting in. Doing so with straight edges was probably the biggest limitation, but if you’re willing to have a bit of arbitrary aliasing in your “curves”, it’s fine. Zoom in to see the details. 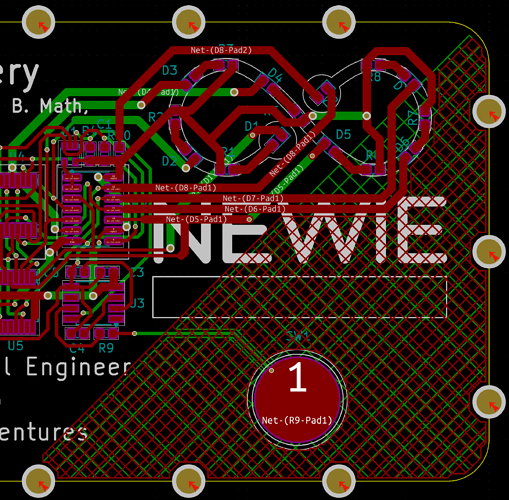 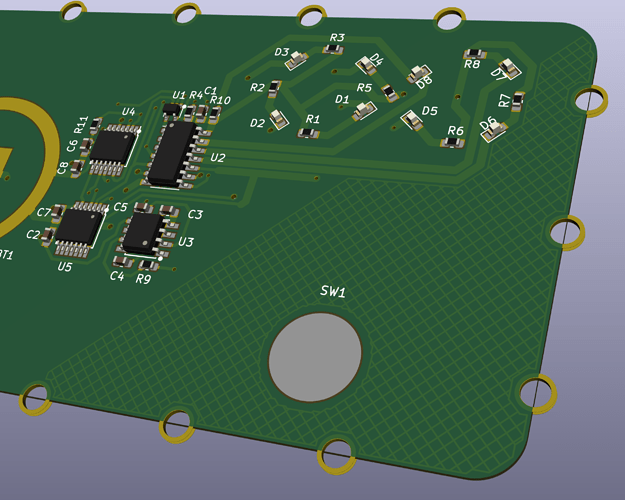 So after this 5 year old thread has been dragged up, I started KiCad V5.99 and about a minute later I had: 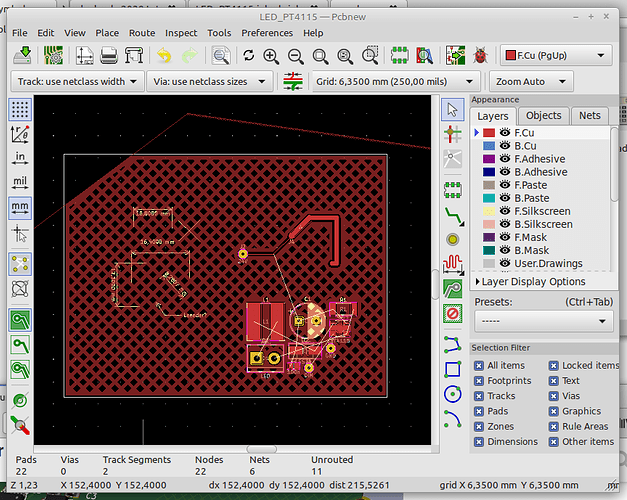 “Default” of the zone was filled, but I got the above results by just edting the zone properties: 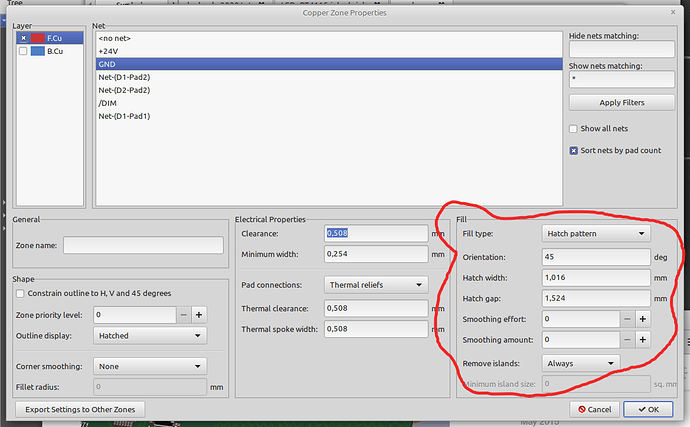 So after this 5 year old thread has been dragged up, I started KiCad V5.99…

But AFAIK the latest version is 5.1.8. What is V5.99? Is that a nightly build of the master branch? I don’t even see a git tag for that version.

The development branch is currently at what is known as a “feature freeze”, meaning that (except for a couple well documented (for the developers, of whom I’m not a member) exceptions) there are no new features being developed for the targeted 6.0 release. So all (most) of the current development work on 6.0 is crushing bugs. The hope is that they will start releasing Release Candidates for 6.0 early next year.