Hi, I’m just getting started with KiCad. I was drawn to it partly because of digi-key integration. However, I can’t seem to find digi key components in the library. For example, I’m looking for:
MPVZ4006GW7U-ND
and
401-1963-ND

Can someone please confirm these aren’t in the library so I know I’m not just going about it wrong?

Assuming they aren’t, is it difficult to create them or is there some other way to go about this?

Digikey supplies a kicad library that contains some (but not even close to all) of their stock as fully specified symbols with footprints. https://www.digikey.at/en/resources/design-tools/kicad

You might want to read the following articles to learn how to add this lib to kicad.

I did install github, clone the library, and then choose manage symbol libraries to get the digi-key and third party libaries in. And then I go to Place/Symbol and put the part number in the filter, but nothing comes up. Is this the right approach? I’m still hoping someone out there can try these part numbers to confirm they aren’t available.

Assuming they aren’t, is there some short cut to creating them? Like maybe finding a similar component and then copying it and editing the copied version?

I do not have the digikey lib installed so i can not check if this part is really missing.

I can however give you pointers on how to make symbols and footprints:

All have large collections of part symbols, footprints and 3d models that can be downloaded in kicad format.

Of course use your common sense and check against the datasheet, but I’d say only a few percent need manual correction.

Neither the MPVZ4006GW7U-ND [Pressure Transducer] nor the 401-1963-ND [Pushbutton switch] seem to be in any of the DigiKey libraries.

However, neither are difficult to make - @Rene_Poschl has already linked to FAQ resources and, in fact, these two items would both be good starting points. You will always have to make some symbols. Even if you just use DigiKey as a supplier, they offer in excess of 8,000,000 product lines - there is no way that all of these will ever all come with a KiCad library entry.

It wouldn’t take long to make a symbol for the pressure transducer. It only has four connected pins and the symbol need only be a box with 4 connections.

The footprint is a very simple DIP8 (there are also surface mount alternatives). This is a standard footprint which is in the library. At this stage I wouldn’t worry about a 3D model.

The switch is the reverse problem. You can use a standard pushbutton switch symbol and you need to design a footprint layout from the datasheet. These switches seem to be on a 5mm pitch square - so very simple to draw on a mm pitch grid. There may well already be a suitable footprint to use in the standard library - I haven’t checked but t.b.h it would probably take me as long to check as to produce a custom footprint. Again the resources linked will talk you through it.

Once you have done this a couple of times you will find it quite straightforward. I understand and appreciate that when starting out you would like the confidence that using a symbol & footprint that someone (more experienced) has run up. However, you potentially spend hours searching for an elusive and perhaps non-existent library when it really would be better to accept that some of the time you are just going to have to make one yourself and spend the time learning that this is part of PCB design - whatever EDA program that you use. When you accept that, the whole process becomes more productive. There are all sorts of scripts and wizards included in KiCad which make the whole process even simpler.

@halachal, I checked those links and symbols, footprints, and models weren’t available. There were request buttons. Have you ever had luck with requests?

@John_Pateman, thank you for your advice, I will start to go through the tutorials Rene linked to.

While I may not have found a software that has the components I need in a library, it seems I have found one with an excellent community! Even better.

Welcome to this Forum. You may want to write a few lines about yourself in your profile. It sometimes helps if we know a little about the person we are responding to.

But in fact you have cited (probably by accident, but nonetheless relevant) two examples that are somewhat problematical and worthy of more detailed discussion.

The pressure transducer doesn’t seem to have a standard symbol that is widely recognized. Seed a search engine with " pressure sensor schematic symbol " and several possibilities show up, including symbols from the world of hydraulics and pneumatics as well as electronics. As a designer responsible for documenting your work, you may want to consider who will be reading the documentation in the future when you create a symbol. (Since this is is an analog, electrically resistive, sensor I would probably use some variation of a potentiometer symbol, with the text notation “Pressure”, or “PSI”, or “kPa”, etc. But I am an analog circuit designer at heart, not an industrial controls engineer nor pneumatic system designer.)

My superficial examination of that sensor’s datasheet indicates that the footprint for an 8-pin IC package - either thru-hole DIP or SMD SOIC, based on your part selection - should be suitable. The standard KiCAD libraries include several variations of those footprints, tailored to assembly methods.

The switch is problematical because, while it is functionally a TWO-terminal device, it has FOUR connection pins which are internally connected as pairs. The two extra pins eat up acreage on your board, but the internal connections can also be a useful resource to simplify routing. Unfortunately, KiCAD doesn’t understand components with internal connections so you usually get a DRC squawk when you try to exploit them. I think this problem shows up on the Forum a time or two every year; a recent thread is at " Tactile switch with internally connected pins ".

I drafted a custom symbol for tactile pushbutton switches like this, showing all four connection pins (plus the shield pin that sometimes connects to the switch’s mechanical frame). After I finish board layout, I modify the schematic to reflect the pin connections as I actually used them : 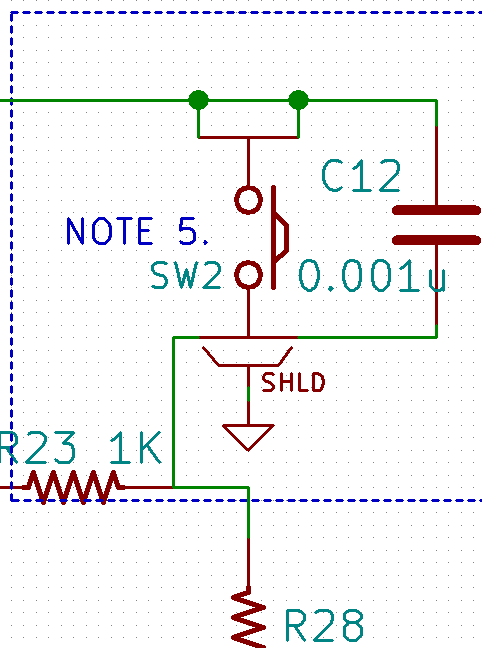 In addition to the sources mentioned by @halachal, there is an extensive library of KiCAD symbols, footprints, and 3-D models at http://smisioto.no-ip.org/elettronica/kicad/kicad-en.htm . You may also find small collections of KiCAD symbols and footprints in various Forums and Projects on the 'net. These can be valuable resources but you must DEFINITELY review them carefully before using them in your project. They are probably not fully compliant with the KiCAD Library Convention (KLC), and may have legal restrictions.

As @dchisholm said. Specific parts have to be done be your self or community help, specially in this case that doesn’t appear to be a consensus about the symbol.
One tip: after create the symbol keep a manf# field with the manufacture part number and digikey# with the Digikey stock code. This may help you @CircuitSam in the next steps (create the BOM, assembly list, …).

Do you have a part number for a switch with the mentioned shield connection?

I really like the graphic block and “Note 5.” text in it.

I do not like your schematic symbol, even though I believe that I understand why you did it that way. My issue is that this is similar to the pin vs tab confusion of some parts.

These small tactile switches have 2 duplicate connections that are not for electrical reasons, they are for mechanical bonding to the PCB; their secondary pins are essentially the same direct connection as the above mentioned 7805.

Is the KiCad documentation ever expected to be seen by a trained electronics technician to troubleshoot and repair the product? If so, give the technician some credit and recognition of their skill-set. Show the intent of the design on the schematic and keep it as simple as possible, and let the tech figure out how the form factor of the physical part plays into the equation.

Bottom line, for me, who does not rule out the possibility of product going to a technician, the schematic looks like this: 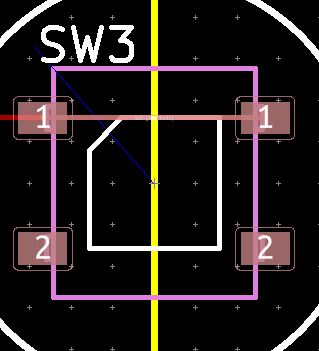 The schematic should clearly demonstrate the intent of the design to the end technician.

The junction dots on the top pins are because there is an external electrical connection between the pins. Look at red vs green in the lines. (You know, if you wanted to kvetch about junction dots, I would think the lack of dots in the symbol graphics breaking convention with the rest of the circuit would be the larger sin… Not to mention the lack of a junction dot on R23.)

Bottom line, for me, who does not rule out the possibility of product going to a technician, the schematic looks like this:

The schematic should clearly demonstrate the intent of the design to the end technician.

Unless, of course, the technician is either unfamiliar with that particular switch, or doesn’t remember which switch pins are internally connected. In that case you just forced the technician to pause their work to find yet another reference to fully understand what is going on.

Thanks everyone for all the info and welcoming me to the forum. A lot of what you’ve all said is over my head at this point, but I’m steadily learning and I’ll refer back to this post once I’m further along and will undoubtedly have several ‘ahhhh, now I get it’ moments

Really glad to have found this forum.

@SembazuruCDE I’m surprised you think that a lack of Junction Dots is an issue for me!

In that case you just forced the technician to pause their work to find yet another reference to fully understand what is going on.

That would be a newbie technician.

If at this point I’ve decided it is worth my time to electrically test the switch the following steps apply:

If anyone new to electronics has any questions as to the why of these steps, please do not be embarrassed to ask. There are some subtleties here and I don’t, at the moment, feel like writing a book on the topic.

A slightly late reply, but the DK KiCad Library is only a small selection of parts so that there is a small assortment of common things you might want, not a comprehensive set of all the inventory. The goal is to give you a couple of everything common.