Hello,
I need to make a touch slider for my project but I am not able to do so as making of footprint in top copper layer is not permitted .I also tried making a touch slider in Altium and importing it in kicad,but found the top layer part missing.I am able to receive the slider if not saved as a footprint ,but as tracks.But this seems to be of no use as there is no way i can save it and use it in my project.I have attached the touch slider made in altium below.If any one can help me with it,pls do reply. 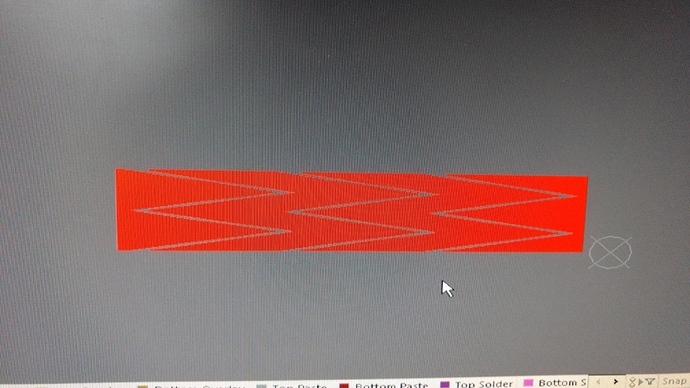 Until KiCad has “custom shape pads” (this feature is still being developed) whatever you do will require some work-around. Unfortunately filled zones cannot be described in kicad_mod files, which makes the work-arounds even more difficult.

I think the easiest workaround would be to write a small script which would create filled zones in a text file with a position and orientation which you specify. Then you can cut/paste these zone definitions into a kicad_pcb file, run pcbnew, and attach each zone to an appropriate pad. The associated footprint should have only the appropriate pads and a box on the Fabrication layer so you can quickly see if the cut/paste zones go where you want them - or perhaps some more alignment markings on the fab layer so that you can manually move the zones if they’re not quite right.

At the moment kicad doesn’t support polygon shaped footprint pads. I belive there is work going on to implement it.

I can offer you two workarounds.

Thanks a lot for your reply.I’ll try it out.

I’ll be grateful if you can clarify some doubts in the above mentioned method.
Where should i save the script and in which format?
After opening the svg file in Inkscape how am i supposed to import in kicad?
While opening the .kicad_mod file shows some error and so I am not able to use it.
Once again,Thanks for your earlier reply!!!

I think there is other workaround to draw a slider once and re-use it.

Create separate project. Open Pcbnew and using zones (not connected to anything) draw a slider. For example:

slider.png865×300 5.57 KB
Save file and close project. Now you have a .kicad_pcb file with slider which you can import to any other project using “Append board” command.
In the destination PCB just edit particular zones giving them proper nets and connect using traces with the rest.
2 Likes
cbernardo September 22, 2016, 10:44am #7

This is the best solution so far; I wish I thought of it. I automatically think of writing scripts rather than using pcbnew to draw and then append.

Thanks a lot for this suggestion.I am finally able to complete my project due to your help!!!
Thanks a ton!!!